The House on Crow Mountain by Rebecca Lee Smith 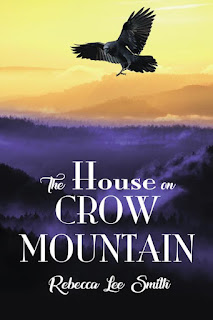 When her aunt suffers a stroke, New York portrait artist Emory Austen returns home to the North Carolina mountains to mend fences and deal with the guilt over her husband’s senseless death. But that won’t be as easy as she hoped.

Someone in the quirky little town doesn’t like Emory. Is it the sexy architect who needs the Austen land to redeem himself? The untrustworthy matriarch? The grudge-bearing local bad boy? Or the teenage bombshell who has raised snooping to an art form? Even the local evangelist has something to hide. Who wrote the cryptic note warning her to “Give it back or you’ll be dead? And what is ‘it’? As the clues pile up and secrets are exposed, Emory must discover what her family has that someone would kill for.

Could it be something of Kent’s they were after? Something he’d kept hidden? He was good at keeping secrets. In fact, he’d been a master at it. After his death, I’d packed the few possessions he hadn’t moved out of the apartment and sent them to his parents. I’d kept nothing except the gold wedding band he’d thrown at me from across the room and his cell phone.

Hard to even think those words, much less say them out loud. It was all still so surreal.

Maybe everything that had happened in Bitter Ridge was karma. Maybe the Universe was finally giving me exactly what I deserved. Kent’s death had been my fault. And no matter how much he had deceived me, or betrayed me, or reduced my sad little trusting heart to shrapnel, I could never forgive myself.

I laid my head on my knees and closed my eyes. I rocked my body back and forth, like a child trying to soothe itself when sleep will not come. Then at last, in the cool dark shadows of the night, I began to cry.

I hadn’t loved Kent for a long time. At the end of our marriage, I hadn’t even liked him. But I had never wished him dead.

Not what  I expected.

The House on Crow Mountain left me curious if it was Cozy or a Suspense.

The cover spoke Suspense to me.

The characters were diverse.

I liked Emory the main character.

I was back and forth along with Emory about James.  Was he a good guy or the villain.

I loved the quirky resident of the facility be where where Emory's aunt was cared for.

She was smart and savvy and helped Emory figure out who might be behind all the drama.

There were a couple of events that to took away the cozy aura of the story for me.

When Tess a bulimic  young woman living with James's family cuts Emory's hair took this reader to a different place than I expected.

The House on Crow Mountain was well written.  The characters were developed.

I enjoyed the plot.

I didn't get a good Cozy feeling.

My review be will appear on Amazon and Good Reads.