Book Spotlight Lies,Spies And The Bakers Surprise by Terry Ambrose

May 23 – My Reading Journeys – SPOTLIGHT 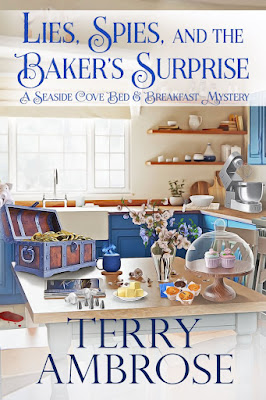 Rick Atwood is happy to welcome Henry and Tara Nicholas to his Seaside Cove Bed & Breakfast. Henry owns a bakery and Tara, a bookstore. They seem like a nice couple—until Rick’s daughter Alex overhears Henry talking on his cellphone to his real wife. The situation blows up the following morning when Tara discovers Henry has been lying to her—thanks in part to Alex’s interference. Tara disrupts the entire breakfast service. She then demands Rick evict Henry.

After finding Henry a room at the town’s motel, Rick hopes the drama is over. But when Henry is found dead the following morning, Rick feels partially responsible. He and Chief of Police Adam Cunningham launch an official murder investigation. They quickly find multiple witnesses who saw Tara in Henry’s room at the time of the murder.

Alex, convinced Tara is innocent, launches her own undercover investigation. Her discovery puts her in a deadly showdown with a sociopath on a bluff near the Seaside Cove Lighthouse. What happens on the bluff could make or break the official murder investigation.