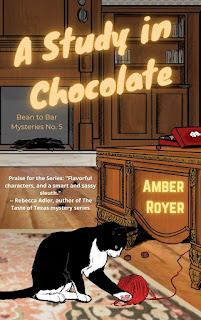 Felicity Koerber’s bean to bar chocolate shop on Galveston’s historic Strand is expanding, as it has become a gathering spot for the community, despite having been the scene of multiple murders. Artists she met while doing a chocolate sculpture are now working out of the shop. So when Felicity is invited to tea by an eccentric art collector, she’s intrigued, especially when she gets asked to pose for a portrait done with chocolate on chocolate. Only, where there is a murder the next day at the same historic house where the tea was held, one of Felicity’s artist friends becomes the main suspect.

When the killer threatens that, unless Felicity unravels the murder, one of her two love interests will be the next victim, she finds herself unwittingly at the center of a puzzle, with a Sherlock Holmes obsessed murderer who wants to be the next Moriarty – and wants to cast Felicity as Sherlock.

Felicity starts finding unexpected connects between her friends and acquaintances, and has to deal with the idea that someone who knows her is a murderer. At the same time, she has to keep her business running, despite construction dust and unruly customers – and an unexpected order for thousands of truffles.

Satchmo the retired police dog turned therapy dog returns to help her sniff out a few clues, and the kidnapping of Ruffles, the quirky artist’s cat, helps lead Felicity into the puzzle. Can Felicity solve it in time to protect the people she cares about from becoming additional victims?

A fun series.  I enjoy Felicity and the other characters in the series.

And the locale really gets me.

For me it is fun following Felicity around her version of Galveston Island, Texas.

Amber Royer is an excellent researcher and weaves a story around real and fictional places.

I kind of think each book gets better than the one before.

As you read you become friends with the characters in a 'Fan Girl' kind of way.  And as you get to know the characters you (at least the reader does) jump on a team and wish Felicity will just make up her mind about Logan or Arlo.

But maybe she won't because then what?  Just maybe there is room for both.

Amber Royer is indeed an expert in Chocolate and writes a story filled with details of chocolate making.

I enjoyed the nod to Sherlock Holmes.

Since I have read all the books in the series I like that Satchmo has returned.

This one was hard to put down as are all the books in the series.

If you haven't started this series check it out!

I received by a complimentary copy.

My review will appear on Amazon and Good Reads

Learn more about the author and check out her blog.  And follow the tour to read more reviews and guest posts.  Click Here