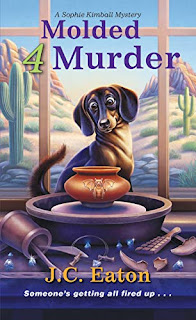 A view to a kiln …
Sophie “Phee” Kimball enjoys working as a bookkeeper for a private investigator. If only her mother Harriet could enjoy her retirement at Sun City West in Arizona—instead of constantly getting involved with retirees being prematurely put out to pasture. This time Quentin Dussler, a prominent member of the clay sculpting club, was found dead, clutching a piece of paper scrawled with Phee’s mother’s name.
Terrified she’s been targeted by assassins, Harriet begs Phee to investigate. What Phee uncovers is a complicated scheme that only the most diabolical of murderers would ever devise. And as she chisels away at confusing clues and potential suspects, Phee unearths something far more precious and valuable than she could imagine. Eager for answers, she takes a bold step—placing herself in the crosshairs of a stonefaced killer …
And others are saying

is a terrific addition to this series. Each new book in this series becomes my new favorite. J.C. Eaton never disappoints.
~Escape With Dollycas Into A Good Book
Molded 4 Murder by J.C. Eaton is a delightfully written, excellent mystery with characters that keep you laughing.
~Baroness’ Book Trove
Phee works quietly and methodically, working with the residents of the complex confronting twists and red herrings meant to help the reader solve the who and why. It’s deliciously deceptive.
~Rosepoint Publishing
. . . a fun story that will keep you guessing as to who did what making for a great time reading. A pleasurable read for fans of cozies. I really liked it . . .
~Books a Plenty Book Reviews
The multitude of mysteries is intriguing too. The twists and turns in the plot allowing all to be unveiled at the conclusion are skillfully created by the author.
~Diane Reviews Books
I found it quite glorious and exciting to see how, what initially seemed like a simple enough homicide develops into a much bigger case that’s certainly out of Phee’s investigative agency’s hand, connecting all the dots and pieces.
~Diary of a Book Fiend
And I thought

From page 1 I was on the edge of my seat.

All of the characters were fun and engaging.  Some quirky. Some funny and some just fun to hang around with.

Phee and her work associates her boss Nate, her boyfriend who is an investigator and Augusta who answers the phones for the P.I. firm are all great characters.

August is a #'s girls and helps figure some clues.

Phee as most good wanna sleuth's are can chit chat with people and find answers.  It takes her no time to solve the petty crimes at the Lillian.

But figuring out who did who and why takes a little more effort and Phee ends up getting her aunt to go check out leads.  Aunt Ina is a go getter and has an eye for detail like $400.00 manicures on  a bar maid.  Hmm.

But it's not until her mom finagles Phee into cleaning out a closet in the pottery club room that clues start coming together.

Phee's aunt and mother makes you laugh and you roll your eyes along with Phee as she deals with their silly ideas and suggestions.

The residents of the Lillian retirement community are quirky, funny and loveable.
From the Gertrude sisters to the 80 + resident that tells Phee 'Let's meet today I might not be around next week.'

I enjoyed Phee and her determination to get answers and solve the mysterious.

I enjoyed Molded 4 Murder and anxiously waiting to read the next  book in the series.

I really like the cover.  It was fun and had me wondering about the story from the beginning.  After finishing the book it was fun to look at the cover again and see all the clues there.

I received a complimentary copy.
My review will appear on retail sites, Net-Galley and Good Reads.
Molded 4 Murder and the Great Escapes Tour will be promoted on social media.