Dangerous to Know -Book Review- I Read with Audra Tours 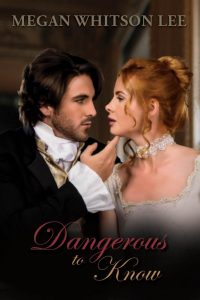 About the book
“Don’t look at him, dear. He’s dangerous.”  Isabella Bankmill seeks a husband whose character matches her list of requirements. The man must share her faith, but he must also possess a certain je ne sais quoi. The enigmatical Lord Gregory Gordon Bromby—London’s newest literary sensation—certainly possesses the latter. Despite a deformed foot and alarming views on politics and religion, he attracts the ladies in droves. Haunted by his past and overwhelmed by his newfound celebrity status, Lord Bromby’s obsession with his own doom leads to reckless behavior. When he is stalked by an obsessive aristocrat seeking an elopement, Bromby’s friends urge him to marry a suitable lady as soon as possible. Intrigued by Isabella’s convictions and hoping to avoid further scandal, Bromby proposes to Isabella.
Isabella also receives an offer of marriage from kind-hearted philanthropist, David Beringer—a man equally devoted to his faith—but she only has eyes for Lord Bromby. Blinded by his talent and good looks, Isabella convinces herself that he’s not as dangerous as everyone claims. But when Bromby’s world violently collides with hers, Isabella must decide once and for all who is lord of her life. God or Bromby?
And I thought
Admittedly Historical/Regency Novels (Romances) are not my 1st choice when I am thinking about a new book.

A cover would have to 'get me' (not into a bunch skin).  This one
got me it hit the Sigh/Gasp button. It is a very romantic cover.

I was offered to read Dangerous to Know as part of the
Read with Audra tour.  I was delighted for the opportunity.
The main reason that I don't usually read H.R.'s is to me they
are usually long and just a bit deep.  With all the history that is thrown in and the locations, culture and language is sometimes
daunting to me.
Dangerous to Know did not hit me as daunting it was a long read. And I did have to concentrate through some parts but the characters drew me in.

Megan Whitson Lee did an excellent job of spinning a tale based on real people.  The writing and detail make you feel a part of the
story.

I always seem to cheer for the rebel, the bad guy or the guy that is
just haunted.  That was the character of Bromby.  He was haunted.
Isabella's character is sweet and charming.
Is it sad to say she probably should have taken the advice and
not look at him.  But, there was chemistry that was hard to deny.

Without giving the story/ending away I had a feeling the reader
might be left feeling that there might just be a part 2 ending in
a Happy Ending for all.

If you are fan of Historical or Regency novels you'll enjoy this book.

I enjoyed reading Dangerous to Know and look forward to reading more from this author.

To read more reviews visit the tour
Posted by GranthamLynn at 12:00 AM