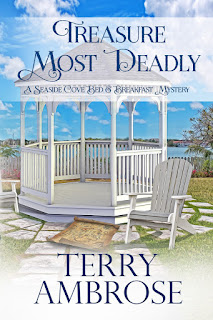 Seaside Cove amateur sleuths Rick and Alexandra Atwood are back!

Seaside Cove Bed & Breakfast owner Rick Atwood is again called on to assist his friend, Chief of Police Adam Cunningham, with a murder investigation. The case seems straightforward enough. Clive Crabbe, who has a quick temper and a strong jealous streak, was found hunched over the victim after the man made advances toward Clive’s ex-wife.

A murder investigation is the last thing Rick wants right now. The B&B is booked solid. The town is inundated with tourists and news reporters chasing stories about treasure thieves. And Rick’s wedding to Marquetta Weiss is just weeks away. As if that wasn’t enough, Rick’s eleven-year-old daughter Alex is not only itching to help the cops solve another murder, but she’s forming an unhealthy friendship with a B&B guest.

As the murder investigation progresses, Rick realizes Alex’s new friend could be at the center of everything. The worst part is that Alex may be the one person capable of cracking the case.

The reader gets a cast of main characters that are charming and delightful.

Alex the 11year old daughter just charms your socks off!   She is 11 going on ?  She is smart and savvy and leaves no stone unturned when she finds a mystery or a crime to solve.

Alex's father Rick really just kina wants to leave crime solving behind and just restore and manager the B&B but with all the murders happening he gets recruited once again.

I enjoy all the main characters Rick and Marquetta (his fiance).  Alex's friends.  And the townspeople.

There are new characters that blend into the crowd in each book. Lot's of tourists, travelers and treasure hunters.  Each adding a bit of interest and a few make the suspect list.

I really enjoy this series.  I have read a few of the other books in the Authors Hawaii series and have enjoyed them .

Terry Ambrose is one author that has made his way into my favorites list.  Ong with Alex.😁