Cajun Kiss of Death by Ellen Byron (Cozy)
In Pelican, Louisiana, Valentine’s Day has a way of warming the heart, despite the February chill. But the air at Crozat Plantation B&B turns decidedly frigid when celebrity chef Phillippe Chanson checks in. And when the arrogant Phillippe–in town to open his newest Cajun-themed restaurant–perishes in a fiery boat crash, Maggie Crozat’s dear friend JJ lands in very cold water.
Available on Amazon
Click Here

The Gold Digger by Melissa McClone
Real estate agent Cambria Baker needs to make a sale, or she’ll be homeless. So, when her broker asks her to do a showing on Mount Hood, Cambria jumps at the chance. The only problem? The buyer is as gruff as he is gorgeous and not impressed with her or the dilapidated cabin.
Tech billionaire Adam Zeile wants to build the perfect mountain lodge where he can forget about work and the women who are only interested in his net worth. He’s excited to see a property with a dream view, but the beautiful real estate agent’s eagerness to make the sale raises his suspicions.
When a mudslide traps them in the cabin, they must put aside their differences. As mutual respect grows into attraction, an unforgettable kiss changes everything. But can their newfound connection last once they’re rescued? Or are they better off burying it and saying goodbye?
Available on Amazon
Click Here

Sweet Afternoon
Willen Hawkins knew exactly what she wanted to do with her unexpected inheritance: use it to fix up the Indigo Inn at Blueberry Beach.
After all, it’s been more than eighteen years since she graduated from Blueberry Beach High and left town.
The life she’s created for herself is far more lonely than the life she’d envisioned for herself as a teen. But if she wants to reinvent herself and start building the life she wants, she has to stop waiting for everything to be perfect and start now.
Drake Jensen wants to disappear.
Being voted the sexiest man alive for the past five years, starring in eight of the top ten highest grossing movies of the last decade and being the most sought-after leading man in Hollywood didn’t keep his wife from running off with the nanny, taking his kids and destroying everything he’d thought he’d been building.
Hiding out at a newly opened inn that no one has heard of before and getting a job as a laborer should keep his identity under wraps.
He’s not staying.
But he hadn’t planned on the town being so supportive nor on falling in love with a woman who is determined to make him her enemy.
Can Willen learn that she doesn’t need to be perfect in order to be loved? Will Drake be able to choose between Hollywood and the new life that could be his

Shawn Barclay didn’t plan to stay in Iowa long. He’d only left his family and the close-knit community of Mistletoe, Arkansas as a favor to his parents. They’d asked him to help the daughter of a friend who was in an accident.

After arriving in Iowa, it doesn’t take long before Shawn invests in saving more than the woman’s farm. When he sees how the town avoids her, he decides to save her reputation, as well.

Bridget Rawlings isn’t exactly considered a catch in Prairie Rose, Iowa. In fact, the locals all but shun her and her three children. A cloud of death and disaster seems to surround both her and her farm. After all, The Bad Luck Widow has already buried two husbands.

Although she admires Shawn’s courage and willingness to help, Bridget doesn’t welcome his aid.

What if the locals are right? What if she is bad luck? She’s not willing to risk Shawn’s life and prove them right.

Then Shawn makes a very public surprise announcement. Will it solve Bridget’s problems, or break both their hearts?

Blind Date with a Billionaire Protector by Evangeline Kelly

He has a history of rescuing women. She’s fresh out of a bad relationship and doesn’t want any man to take care of her.

Izabella Reed got on a bus and headed to New York with the intention of vanishing from her abusive ex-fiancé. She promised she would never trust a man again, especially if he had money. Living off the grid was the only way to protect herself, but it came with a few complications. She needed a place to stay without putting her name on a lease. When a woman offers her free rent to go on a blind date with a handsome billionaire, she accepts because she has few options.

Sebastian Chambers may have money and looks, but he has a soft spot for vulnerable women, and that often gets him into trouble. His therapist says he likes to rescue people because of deep-rooted issues in his past, so he knows he has to stay away from damsels in distress.

But then he meets Izabella, and everything changes. On paper, they would never work, but can they overcome their fears to find a love that conquers all?

*This is a contemporary Christian romance with strong Biblical themes and Bible references.

With her ex-husband, Ted, working nearby in an adjoining county, Kate Fox is eager to prove she’s the better sheriff. And when the less-than-popular ex-foreman of a local ranch is found dead, Kate gets the opportunity she’s been looking for.

When the quaint English town of York hosts a Jane Austen Society conference, bookseller Erin Coleridge is glad to get out of Kirkbymoorside for a while–until featured speaker Barry Wolf suddenly perishes from what appears to be a heart attack.

A Scone of Contention by Lucy Burdette (Cozy)

Key Zest food critic Hayley Snow and her groom, police detective Nathan Bransford, chose Scotland for their long-delayed honeymoon, hoping to sightsee and enjoy some prize-winning scones. But their romantic duo swells to a crowd when they’re joined by Nathan’s family as well as octogenarian Miss Gloria.

A Wrinkle in Thyme by Sarah Fox (Cozy)

This summer, Wildwood Cove is hosting a special event, Wild West Days, to celebrate the town’s storied past. Wildwood Cove’s museum is also getting a new lease of life thanks to a longtime resident’s generous bequest. Several locals, including Marley McKinney-Collins, owner of the Flip Side pancake house, offer to transfer artifacts to the beautiful restored Victorian that will become the museum’s home.

Savanna Shepherd, a former art authenticator turned grade school art teacher, is delighted when her Uncle Max and Uncle Freddie move to Carson. Uncle Max takes a job at Libby’s Blooms, where Savanna teaches a still life painting class for adults. But one morning, Uncle Max finds a dead body in the rooftop greenhouse…and even worse, it looks like an inside job.

One For The Hooks by Betty Hechtman (Cozy)

These are the dog days of August, but you won’t catch the Tarzana Hookers crochet club napping. While Molly Pink knits together an idea for a new project, Miami Wilson busily converts a house she inherited into a rental property. But Miami is left shorthanded when Sloan Renner, the woman helping her clean out the house ends up dead under a pile of smelly seafood.

The opulent furnishings and period theming of Hotel 1911 invite guests to experience the charm of the early 20th century. But for hotel clerk Ivy Nichols, the mansion also harbors secrets about her past and the family she never knew. When the Pittsburgh chapter of the Association for Gravestone Studies checks in for their national conference, Ivy is intrigued to learn that one of them has connections to her family. 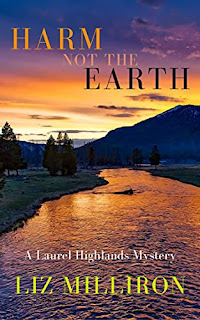 Harm Not The Earth by Liz Milliron (Traditional)

When Southwest Pennsylvania’s summer rains flood the Casselman River, State Police Trooper Jim Duncan finds a John Doe body in what is initially believed to be a tragic accident. But when a second victim, John Doe’s partner in an environmental group at odds with a nearby quarry operation, is rescued, all thoughts of accidental drowning are abandoned. After Jim is invited to join the official investigation, he begins to think a career shift might be in his future.

Posted by GranthamLynn at 2:26 PM