Daughter of the Sun by Zoe Kalo 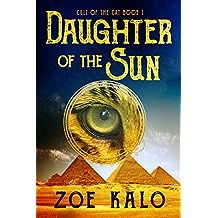 About the book
Sixteen-year-old Trinity was born during a solar eclipse and left at the doorsteps of a convent along with a torn piece of papyrus covered with ancient symbols. Raised by nuns in the English countryside, she leads a quiet life until she’s whisked away to the Island of Cats and a grandmother she never knew. But before they can get to know each other, her grandmother dies. All that Trinity has left is a mysterious eye-shaped ring. And a thousand grieving cats. As Trinity tries to solve the enigma of the torn papyrus, she discovers a world of bloody sacrifices and evil curses, and a prophecy that points to her and her new feline abilities. Unwilling to believe that any of the Egyptian gods could still be alive, Trinity turns to eighteen-year-old Seth and is instantly pulled into a vortex of sensations that forces her to confront her true self—and a horrifying destiny.CULT OF THE CAT - Series BlurbAccording to ancient Egyptian prophecy, three feline goddesses—Bastet, Sekhmet, and Mafdet—would one day be reborn as triplets during a solar eclipse.But someone—or something—separated them at birth. Because if ever they were reunited, they would unleash a blistering power that could destroy the world. In an adventure where the past confronts the present, and blood, betrayal and secrets abound, the triplets face each other for the first time. And discover they’re the only force able to stop the evil god Apophis from enslaving humanity.
And I thought
Not a normal kind of read for me.

A page turner that will keep the reader engaged and turning the pages to the end.

I received a complimentary copy from Author Assistant.
This review will appear on Amazon and Good Reads.

Buy the book
Amazon
Posted by GranthamLynn at 1:00 AM