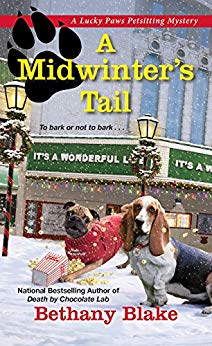 About the book
To bark or not to bark . . .
Professional pet sitter Daphne Templeton loves the holidays in Sylvan Creek, Pennsylvania. And nothing gets her into the spirit more than the town’s annual Bark the Halls Ball. The whole community will be there to wag their tails, especially this year’s special guest—Celeste “CeeCee” French, founder of a national chain of pet care franchises, who’s returning home to announce plans for a bright new flagship store.
But not everyone’s celebrating CeeCee’s homecoming. Daphne’s friend Moxie Bloom, owner of Spa and Paw, a unique salon for people and their pets, has plenty to growl about. So when CeeCee is found face down under Sylvan Creek’s town Christmas tree, stabbed with a distinctive pair of professional-grade pet shears, suspicion lands squarely on Moxie. Despite Daphne’s promises to Detective Jonathan Black, she quickly reprises her role as amateur sleuth. Ably assisted by her basset hound sidekick, Socrates, she must hurry to prove her friend’s innocence before a killer barks again . . .
Includes recipes for homemade pet treats!
Character Guest post
Daphne Templeton’s Holiday Letter

Daphne Templeton is a peacenik who doesn’t want to keep getting mixed up in murders. But somehow, she seems to stumble across bodies on a regular basis. And, as she points out in her first-ever holiday letter, her year has been eventful in other ways, too!

Merry Christmas!
This is actually the first time I’ve been organized enough to send a holiday letter, which still doesn’t seem like a good idea, as I’m writing it. However, my mother insists that this note is “an important tool for communicating with various constituencies,” which I believe means it’s meant more for clients than friends.
To be honest, I’ll probably rip this up, or lose it on the floor of my van before I can mail it, but for now, here are a few highlights from the past year:
So, that’s the year-end wrap up. I’m wishing, as always, for peace on Earth — and that my best friend, Moxie, will beat a murder rap. The same things I wish for every year, right?
Stay safe — and adopt, don’t shop!
Daphne, Socrates and Tinks

And I thought
The Lucky Paws Pet Sitting Mystery Series has quickly become one of my favorite series.

I was delighted to get the opportunity to read book 4.  I have enjoyed each of the previous 3.  Each book is written as a stand alone and this series is easy to get into.

Many of  the old characters human and K-9 are back and a few more are added in this installment.

The K-9 characters kind of make this series.  First there is
Daphne's dog Socrates.  He is pictured on the covers with a new friend in each installment.

This one introduced a new dog named Tiny Tim that was a bit of a mystery at first much to Daphne's chagrin she seemed the only one that could see him.  He was fast on his feet and disappeared before anyone else caught sight of him.  He becomes a big help to Daphne as she investigates  not only one but 2 murders and they are both Daphne's high school class mates.

And then a new character that promises to be a huge part is the prissy poodle Snowdrop who is just too prissy and sometimes mean to like.  But you have to give her some patience because it is her mistress that gets the axe.  Well it's acutally not an axe but a pair of scissors and it's discovered that they belong to none other than
Moxie.  Yes Daphne's bestie is a prime suspect.

As usual in this series Daphne is cautioned about investigating not only by her mother that is appalled that her daughter seems to always be finding dead bodies which almost makes her a disgrace.

The handsome and elusive Detective Black is none to happy about the sleuthing but he seems in this installment to be a bit more accepting of Daphne's penchant for investigating.

Now if we could get the two on a 'real date' and maybe standing under the mistletoe then everything would just be all tidy!

This is a good cozy mystery.  No foul language.  No bedroom scenes not even a kiss (maybe next tine)and the crime although the main part of the plot is down key and not graphic.

I received a complimentary copy.
My review will appear on retail sites, Net Galley and Good Reads