"What is that?" Cal Crawford looked in disgust from Pete to the sagging bundle under his pitching coach's arm. "It's a dog, of course," Pete said. "Your mother's dog. What kind of a question is that?"The dog stared at Cal with mournful brown eyes. Or maybe it was the hangdown ears or the greying jowls that added to the gloom on the gaze.  "I've had dogs. Hunting dogs. That's not in the same line."   "She's a dog all right, a dachshund mixed with something taller and wider." Pete gave the animal a conciliatory rub between the eyebrows. "I've been taking care of her since the funeral."Cal shifted. He'd forgotten. He'd been on the road when his mother passed away and Pete had taken care of the details, Cal flying in just before the funeral and jetting off immediately after.  "That's right," he said. "It was good of you to do that, Pete."   "Yeah, it was, but I've got to have my boat rehauled and anyway Tippy's not a good sailor. I think she's prone to seasickness."  Cal winced as the physical therapist kneaded the sore muscle in his shoulder. Shouldn't be so tender, not in the off season. He shoved the thought aside. The dog stared at him. "So why did you bring it here?""Her, not it. Name's Tippy, like I said, and your mother wouldn't want her to go to the pound. I've asked everyone from the shortstop to the hot dog vendors and no one wants a thirteen-year-old mutt of dubious ancestry."Cal gaped as the facts assembled themselves in his mind. "You're not thinking that I'm going to take it?""Why not?""Spring training's coming up."Pete quirked a sarcastic eyebrow. "I'm aware. We work for the same team, you know." "I'm a starter.""I'm aware of that, too, Mr. Big Shot Pitcher. I've been watching you since single A ball, sonny boy, when you couldn't lace your cleats by yourself, so don't put on airs with me." Cal was adrift at what Pete seemed to be asking him to do. "I don't like dogs that don't work for their keep.""You make a seven figure salary. Hire someone to like her for you." Pete placed the ungainly dog on the floor and gave her a scratch behind the ears. Her knobby paws slowly slid outward on the slick flooring until she oozed like a puddle, round belly first, onto the tile. "Here's your new daddy, Tippy. He's kind of crabby for such a young guy, but don't let that fool you. He's still grieving for his Mama. Underneath, he's got a heart of gold." Pete shot Cal a look. "Somewhere."Cal leapt out of the massage chair. "You can't leave me with this animal."Pete fished a tattered rectangle from his pocket. "Here's a card for a dog sitter.""But.."  "She's vetted and trained, she works with celebrity clients exclusively. Takes care of Coach Bruce's goldens when the missus is out of town.""I can't...""Yes, you can. I've got a meeting. See you later." He clutched the card. "No, Pete. This is not happening. I am not taking this dog." "She eats pretty much anything and she's already had breakfast," he said. "I'm not doing this." Pete headed down the hallway.  "And whatever you do, don't let her near your car keys.""Why?" Cal yelled down the corridor. "What does it do with car keys?""She," Pete thundered. "Tippy's a girl."

Take one abrasive professional athlete, a quirky out-of-work schoolteacher, and an overweight geriatric dog, and you're ready for a lesson in love...Tippy style.
Pro baseball pitcher Cal Crawford is not a dog guy. When he inherits his deceased mother's elderly dog, Tippy, he's quick to call on a pet-sitting service.
Gina isn't thrilled to be a dog sitter when her aspirations lie in the classroom. Furthermore, she can't abide the unfriendly Cal, a man with all the charm of a wet towel. But with no other prospects and a deep love for all things canine, she takes the job caring for Tippy.
As Gina travels through Cal's world with Tippy in tow, she begins to see Cal in a different light. Gina longs to show Cal the God-given blessings in his life that have nothing to do with baseball or fame. When her longing blooms into attraction, Gina does her best to suppress it. But Cal is falling in love with her too...
Discover the charming story of Tippy, the dog who brought a family together. 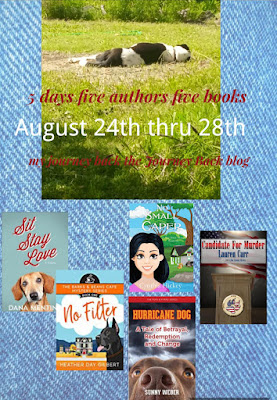 Did you see the Dog Days Of Summer featured post?

Thanks for visiting. Come again soon! 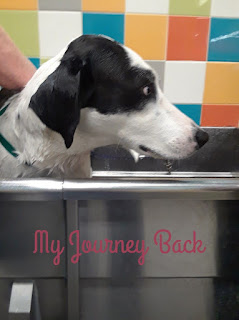