New Releases The Caught My Eye 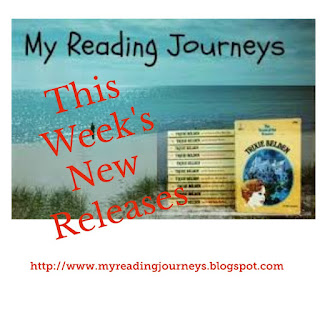 Featured in no particular order. 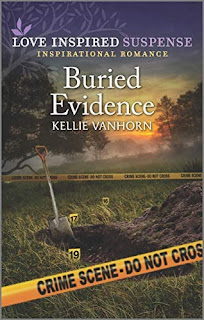 Returning home isn’t easy for forensic anthropologist Laney Hamilton, especially when it means examining bones that could belong to her long-missing best friend—the sister of the man she once loved. But now someone wants Laney dead, and her ex-boyfriend, police sergeant Ryan Mitchell, must shield her. As the predator stalks them, can Laney and Ryan finally uncover the tragic truth about their past?

Skylar Davis is grateful to have the dog her husband nursed back to health on his last deployment. But the struggling widow can barely keep her three daughters fed, much less a hungry canine. Kyle Mitchell’s soldier’s instincts won’t leave them behind—they’ll all come live at his ranch. Her husband was his best friend, after all. And Skylar? He’ll give her the love she deserves…if she’ll forgive him when his secrets are exposed. 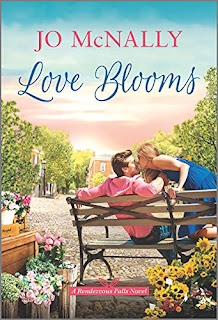 About the book
It’s never too late for a second chance…
Tonight should be the best night of Lucy Higgins’s life. Tomorrow she’s finally marrying Owen Cooper. She’s been waiting to start a life of wedded bliss, like the happy marriage her parents have. Except…she just learned her parents are divorcing and she’s freaking out. Owen has been so distant lately, shutting her out. Suddenly this big wedding seems like a really bad idea. Packing up her car, Lucy bolts for Rendezvous Falls and finds work at a flower shop while she gets her life together. The last thing she expects is for Owen to show up, wanting her back.
Owen Cooper’s carefully planned out life is ready to begin. He’s home from the military to join the family business and marry the sweet girl who captured his heart…until Lucy runs out on him. That was not part of the plan. Armed with an article that promises to help him win her back, Owen heads to Rendezvous Falls. But from the moment he sees her again, she seems…different. Happier, more confident and at ease. Can he convince this new version of Lucy that he’s become the man she deserves? He might need a little help from the local book club to accomplish this mission…
Available on Amazon
Click  Here 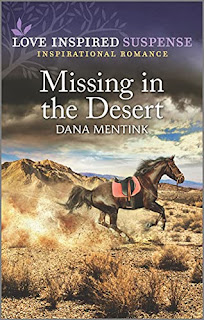 About the book
ive years ago, her sister disappeared…
Now someone is coming for her.
Who would believe that Mara Castillo's sister—missing and presumed dead—suddenly sent a one-word text? Now Mara wants answers, even if it means stepping into a killer's sights with her brother's best friend, rancher Levi Duke, as her only protection. But with someone who has everything to lose after her, uncovering a long-buried secret could save her life…or claim it.
Available on Amazon
Click Here 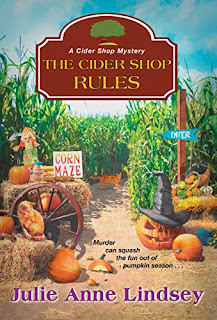 About the book
Autumn in Blossom Valley means pumpkin patches are ripe and Winona Mae Montgomery and her Granny Smythe’s cider shop is flourishing. But with this season comes . . .
A FATAL HARVEST
The Fall Festival is in full swing. Civil War reenactors from three counties are partaking in Blossom Valley’s tribute to John Brown. Blue Ridge Mountain foliage is in full bloom. And best of all is Jacob Potter’s pumpkin farm where his hay rides, piglet races, pumpkin picking and corn maze are time-honored draws for locals and tourists alike. That’s why it’s such a shock when Mr. Potter is found dead, hidden under a tarp in the back of Winnie’s pickup truck. This certainly betrays Potter’s reputation as one of the town’s most popular citizens. Fortunately, when it comes to solving a murder, no one has a patch on Winnie. Now, all eyes are on her to do it. Unfortunately, that includes those of the killer who’ll do anything to keep an orchard full of secrets buried.
Available on Amazon
Click Here 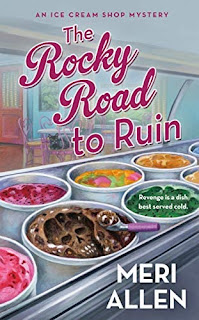 About the book
Description not available
Available on Amazon
Click Here 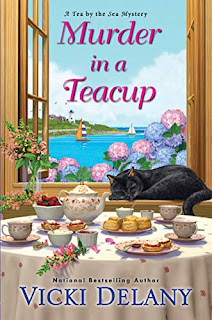 About the book
Lily has her work cut out for her when a visit from her grandmother Rose’s dear friend, Sandra McHenry, turns into an unexpected—and unpleasant—McHenry family reunion. The squabbling boils over and soon Tea by the Sea’s serene afternoon service resembles the proverbial tempest in a teapot. Somehow, Lily and her tearoom survive the storm, and Sandra’s bickering brethren finally retreat to Rose’s B&B. But later that evening, a member of their party—curmudgeonly Ed French—dies from an apparent poisoning and suddenly Tea by the Sea is both scene and suspect in a murder investigation!
Mercifully, none of the other guests fall ill. They all ate the same food, but Ed always insisted on bringing his own special blend of herbal teas. So it seems, amid the whining and dining, someone snuck up to one of Lily’s cherished teapots and fatally spiked Ed’s bespoke brew, but who? Was it Ed’s long-estranged sister-in-law? Did teenage troublemaker Tyler take a prank too far? Or perhaps the family’s feuds have been steeping for longer than anyone realizes? It’s up to Lily, Rose, and their friends to get to the bottom of the poisoned pot and bag the real culprit behind the kettle murder plot.
Available on Amazon
Click Here 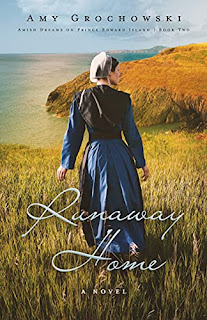 About the book
Can love find a home for a runaway cowboy and the Amish woman he left behind?
Noah Detweiler thought he’d left his Amish life forever. After years on the Albertan prairie as a cowboy, he’s finally found peace with God and purpose at Second Chance Ranch working with special needs children. But when he discovers time is running out for any hope of reconciliation with his father, Noah is forced to revisit his past and the woman he left behind.
Rachel Erb remains content with Amish life on Prince Edward Island by focusing on her faith and her job caring for animals—until Noah returns and the secret longings of her heart are exposed. But loving Noah is destined to break her heart again—no matter what she chooses.
A future together seems as far out of reach as it ever has been for Noah and Rachel. Their dreams won’t be realized without sacrifice. Only who will pay the cost?
Available on Amazon
Click Here 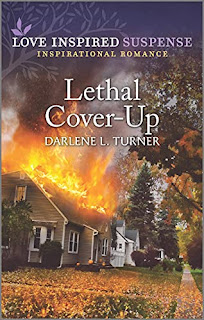 About the book
Some secrets are dangerous…
But uncovering the truth could be deadly.
Border patrol officer Madison Steele knows her sister Leah’s fatal car crash was no accident. Someone’s willing to kill to cover up a pharmaceutical company’s deadly crime of distributing tainted drugs. Now they are after Madison to tie off loose ends. But with her high school sweetheart, Canadian police constable Tucker Reed, at her side, can Madison expose the company’s deadly plan before she becomes the next victim?
Available on Amazon
Click Here 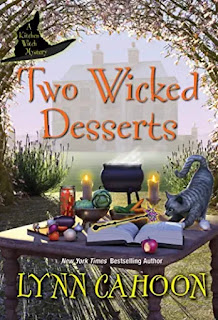 About the book
Mia Malone conjures up delicacies while casting about for clues in New York Times bestselling author Lynn Cahoon’s Two Wicked Desserts, continuing her Kitchen Witch Mystery series . . .
Magic Springs, Idaho, may be a small town, but Mia Malone is living an enchanted life running her own catering business and cooking school. And while she’s teaching the locals culinary craft, her grandmother is teaching her witchcraft for the day she inherits the family magical spells that have been passed down for generations. Unfortunately, all that knowledge is not helping Mia or her grandmother in removing the spirit of warlock Dorian Alexander from Mia’s cat Mr. Darcy.
But even though Dorian hasn’t yet left this earthly plane, his spells have already been transferred to his daughter Cindy’s grimoire. An actress looking for her big Hollywood break, Cindy is hoping there’s something in her father’s bag of tricks to make her a star. But playing with magic has only resulted in a trip to Idaho where Cindy finds herself the number one suspect in the murder of a hitman whose body was found in the garden of Mia’s Morsels. Now it’s up to Mia to conjure up a killer before everything she’s worked so hard for vanishes with a poof!
Includes Recipes!
Available on Amazon
Click Here

About the book
The bestselling author of the Irish Village mysteries sets her new series in Galway County, where former New York interior designer Tara Meehan finds murder in the ruins.
Former New Yorker and interior designer Tara Meehan is eagerly anticipating the grand opening of her architectural salvage shop Renewals in her newly adopted home of Galway. She's in the midst of preparations when heiress Veronica O'Farrell bursts in to announce she’s ready for some renewal of her own. To celebrate one year of sobriety, she’s invited seven people she wronged in her drinking days to historic Ballynahinch Castle Hotel in neighboring Connemara to make amends in style.
But perhaps one among them is not so eager to pardon her past misdeeds. Veronica is found lying in the ruins of manor house Clifden Castle with an antique Tara Brooch buried in her heart—the same brooch Tara Meehan admired in her shop the day before, posting a photo with the caption: #Killerbrooch. Now she’s a prime suspect, along with Veronica’s guests, all of whom had motives to stab the heiress. It’s up to Tara to pin down the guilty party . . .
Available on
Amazon
ClickHere 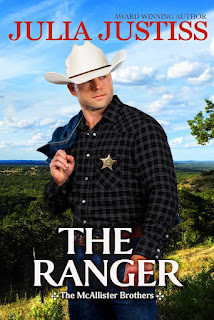 About the book
He can’t resist a puzzle…
When Texas Ranger Brice McAllister spies a sexy woman in short shorts gardening in her backyard, he can’t help but flirt. She shuts him down hard, and Brice is astonished when he realizes this alluring woman is also the aloof and dowdy librarian—complete with thick-framed glasses and a shapeless dress—who helped him research land deeds earlier that day. He’s instantly intrigued and sets out to discover more—namely, why she’s clearly hiding herself.
She can’t attract attention...
After one side of her crime family is involved in her fiancé’s death, Maria Giordano puts half a continent between herself and her L.A. home and family. She moves to Whiskey River and reinvents herself as “Mary,” a serious and plain librarian. Her only indulgence is her garden and cooking with her neighbor’s young daughter. And then she meets Brice.
Maria has every reason to avoid and resent a man with a badge, but when she needs protection, the last man she thinks she can trust is the first one she turns to.
Available on Amazon
Click Here 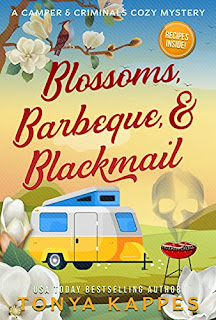 I thought I had my hands full when Dottie Swaggert and Mary Elizabeth Moberly entered the Ms. Blossom Queen Beauty Pageant for seniors but when I witnessed a fight at the festival between Carrie Patillo and Jason Dresser, Carrie's daughter's accused killer, I knew Jason was wrongfully accused for the murder and set up.

How was I going to prove it before the trial started?

Easy. Gather the Laundry Club Ladies and use our unique sleuthing skills. Right?

After we uncovered some evidence of blackmail and head on over to tell Jason what we found out. . .we found out something alright. The true killer got to Jason first.

If that wasn't enough to deal with, Bobby Ray Bond found his real mama. With her impending arrival, we Laundry Club Ladies have our hands full with Blossoms, BBQ, & Blackmail.

Welcome to Normal where NOTHING is normal!

Posted by GranthamLynn at 5:14 PM