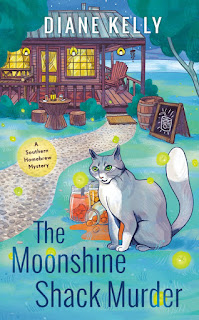 The Hayes family has made moonshine in Chattanooga since the days of Prohibition, and Hattie is happy to continue the tradition, serving up fun, fruity flavors in mason jars for locals and tourists alike. All signs indicate her new ‘shine shop will be a smashing success. What’s more, mounted police officer Marlon Landers has taken a shine to Hattie. For the first time ever, the stars seemed to have aligned in both her work and romantic life. But when a body ends up on her store’s doorstep alongside a broken jar of her Firefly Moonshine, it just might be lights out for her fledgling business.

The homicide detective can’t seem to identify the person who killed the owner of a nearby bar. The only witness is Hattie’s longhaired gray cat, and Smoky isn’t talking. When the detective learns that the victim and Hattie had a heated exchange shortly before his murder, she becomes her prime suspect.

Lest Hattie end up behind bars like her bootlegging great-grandfather a century before, she must distill the evidence herself and serve the killer a swift shot of justice.

Oh boy a new Cozy by a favorite author.  No bias here.  Well not much!

I was so excited to to get the chance to be on The Great Escapes Tour and feature Diane Kelly"s new book.

I wasn't too sure about the Moonshine theme but Moonshine is the  rage now and I knew this Author would give us a good 'ole mystery, and maybe a little suspense.  And best of all some charming characters and a charming town.

The main character Hattie is a sweetie.   But she can stand up and dig up evidence when need be especially to keep herself out of jail.

There's the beginnings of a little romance with the mounted police office Marlon.

And then there's Hattie's grand daddy that comes over from the Senior home and hangs out at the Moonshine Shack entertaining this trader.

I love to get into a new series.

But the waiting for the next one leaves me anxious maybe in need of a little 'Shine to soothe the spirit.

I received a Complimentary copy.

My review will appear on Good Reads and Retail sites.