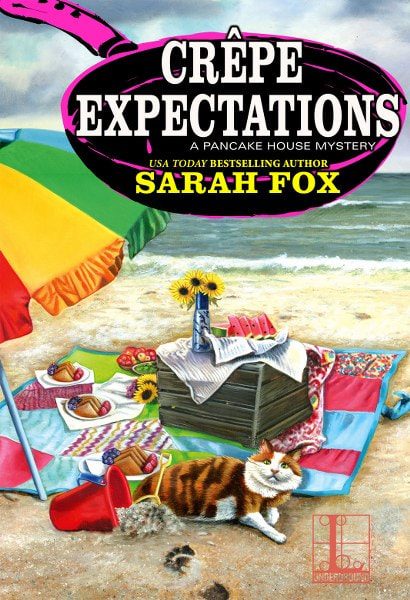 About the book
When a murder case from the past heats up again, it’s up to Marley McKinney to sort through a tall stack of suspects in the latest Pancake House Mystery. . .
Although it’s a soggy start to spring in Wildwood Cove, the weather clears up just in time for the town to host an amateur chef competition. Marley McKinney, owner of the Flip Side pancake house, already signed up to volunteer, and chef Ivan Kaminski is one of the judges. But when Marley visits her landscaper boyfriend Brett at the site of the Victorian mansion that’s being restored as the Wildwood Inn, she discovers something else pushing up daisies: human remains.
The skeleton on the riverbank washed out by the early-spring floodwaters belonged to eighteen-year-old Demetra Kozani, who vanished a decade earlier. While the cold case is reopened, Marley must step in when some of the cook-off contestants fall suspiciously ill. Stuck in a syrupy mess of sabotage and blackmail, it falls to Marley to stop a killer from crêping up on another victim. . .

And I thought
A fast page turning ride filled with suspects and more than one crime.
I enjoyed the plot(s).  I enjoyed the characters.
Marley is savvy and sweet at the same time.
Brett her boyfriend is supportive and just a great guy all around.
Others in the cast are interesting and charming . . . well some of them.  A couple end up being sent down the river.
I enjoyed the small town feel.
If your a fan of a good Cozy Mystery check this one out.
It will draw you in and make you hungry all at the same time.
The recipes at the end are mouth watering.

I look forward to reading more in this series.

Enter the giveaway
Posted by GranthamLynn at 12:00 AM