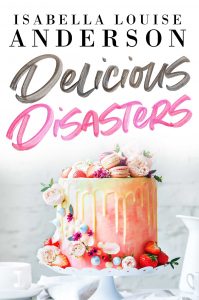 About the book
When Tessa Markham’s bookstore gets bought out, she is forced to face an uncertain future. After her best friend challenges her to start baking, she accepts—even if the last time she baked wasn’t what she would call a delicious success.
After a small kitchen fire, Tessa’s life begins to change. She finds encouragement from a sexy fireman, agrees to a questionable ruse to help another business owner with a complicated situation, and needs to be there for her best friend now more than ever.
Can a delicious disaster lead to a new future and a successful baking career?
And I thought
A pleasant read.  I really enjoyed Delicious Disasters.
Author Isabella Anderson gives the reader a fun and engaging story.  This one was a page turner.

I enjoyed all the characters.  This was a fast read for me because I was so engaged from the beginning.

I enjoyed Tessa and her friend C.C.  Tessa is a hardworking woman trying to begin again after having to close her family book store and sell the building.

She works hard learning to bake cakes and manages with the help of her friend C.C. to get a few over the top clients that are a bit hard to handle.  Being a hard worker and finding her "Jam" baking she begins to be 'sought after'.

The romance between Tessa and Brye.  He's just a great guy.
The bedroom door is shut so MaMa and Jazzy Grandma would
both enjoy this one.

The only negative I can say is I thought that the conflict didn't really flow.  Ignoring that I loved the story.

I would love it if this were a series.  Bringing in one of the other firemen or C.C.'s love story an interesting Scandalous romance.
Or maybe the Chef Hope who manages a cooking school.

I look forward to reading many more books by the author.

“I cannot believe I picked chocolate mix,” said C.C., sounding astonished as they entered Tessa’s home, each of them carrying a handful of grocery bags.
Tessa laughed, setting the bags on her kitchen counter. “Believe me, you’ll be surprised at all the changes your taste buds will have when you start baking.”
“Really?” C.C. scoffed. “You’ve got to be kidding me.”
“Trust me—even wine tastes better,” Tessa replied, chuckling. She turned away from C.C., adding, “Maybe it’ll calm down your need for some action,” and very slowly, Tessa caught C.C. try to hide a smile.
“Maybe it will,” C.C. admitted as boisterous laughter echoed from each of them. Shaking her head, C.C. looked at Tessa. “What have I created? I mean, I never really thought you’d go through with it when I suggested that you start baking, but now, it’s like you’ve made something of yourself, and I’m extremely proud of you.”
“Thanks, Chelly! I’ve learned a lot, mainly about myself in the meantime, but it’s been quite a journey,” Tessa replied as she reached for the oven knob to preheat the oven. “Now, it’s time to get to work, and as always, let’s try not to set off the fire alarm.” This caused them to burst with more laughter before they each downed a bottle of water, then they dove into baking mode, with C.C. following Tessa’s instructions.
After having each made a cake, which were in the oven, Tessa and C.C. sat down outside on Tessa’s backyard patio swing.
“So, if you don’t mind me asking, what really is your relationship with Javier?” Tessa asked, diving right into it. “Because from the way you talked about him, it seemed like much more than a political candidate.” From out of the corner of her eye, she saw C.C. grin. “I’m sorry, I don’t mean to pry—I’ve watched Scandal, so I don’t want to create drama if there isn’t any . . . but—”
“We’re in love, Tessa,” C.C. whispered as she let out a breath like she’d been holding in a deep dark secret.
They’re in love? Very slowly, like trying to coax a kitten, she stayed quiet, not wanting C.C. to hold anything back. As Tessa looked at C.C., she stared ahead of her.
“It all started when he came into the salon, security was with him, of course. Well, come to find out, his regular hairdresser was on maternity leave, and he had an event that night. Just my luck, I was the only one between clients, so within minutes, I had a smock around him and was sprucing him up—not that he needed it by any means.” C.C. ran her hands through her hair, bashfully adding, “After I spun him around and took off his smock, he asked me to be his date and accompany him to an event that evening. Now, at first, I thought he was joking, but it wasn’t until one of his security guards handed me a phone number and instructed me to call it at seven o’clock that night with my address that I realized he was serious.” C.C. let out a small chuckle before she added, “I know, very American President, right?” Her comment about the mid-90s movie made Tessa let out a small giggle. “Anyway, since that night, he’s been sweeping me off my feet.” C.C. looked down at her unmanicured nails and began to pick at a cuticle. “There’s only one, I mean, two bad things about this whole thing.”
“What are they?” Tessa asked after C.C.’s long pause.
“Well, from that first night we caused quite a stir in the political world. I don’t think Javier thought about the repercussions, that having me as his date would cause such trouble for his campaign. This means that we can’t be seen together—not yet anyway. You see, he’s going through a high-profile divorce, and with the campaign, his closest adviser thinks it would do more harm than good and that being seen with a younger woman would look bad. Apparently, unless we’re engaged, it could cause a scandal or something.” She wiped the corner of her eyes and looked at Tessa. “Right now, the situation sucks, but when that day comes and we can finally be together—probably after the campaign—I’ll be shouting from the rooftops how much I love him.”
A long moment passed, then Tessa quietly asked, “What’s the other thing?”


“I’ve not been able to share any of this with my best friend,” C.C. replied as tears began falling from her eyes, and Tessa pulled her in for a tight hug.

To read more reviews visit the tour at Lola's.