The Murders at Astaire Castle-Lauren Carr 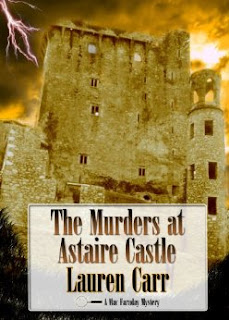 A bit of a switch up...Starting with What I Thought...
They just keep getting better!
Which is kind of a strange statement since this is book 5 in the series.
I have really enjoyed meeting Lauren Carr and Mac Faraday and of course Gnarly.
The first introduction I had to read this series was with the most recent title Candidate For Murder #12.  It was 5 stars!
The Murders At Astaire Castle is just as good as all the others that I've read.  In some ways I kind of liked it better.  But maybe that is because I've really come to enjoy these characters.
Lauren Carr has a way of weaving a story and the characters together that keeps the reader interested and wanting to be a part of the story.
Each book does have a lot of characters.  But it is very easy to keep track.
Lauren does have a 'caution' at the beginning of this book letting
the reader know ..."There is some supernatural elements, I would not classify it as paranormal."
The story takes place around Halloween.  This is a murder
mystery and there is quite a long list of people that have lost their lives at The Castle.  The story takes place over a few years.
And gives the reader a 'back story' into David's (Mac's brother) history.
As is the normal for this series although its a murder mystery it is not graphic.  There are twists and turns and I was kept on the edge of my seat.
Of course Gnarly is a huge part of the story.  Everyone loves
Gnarly even though he is a bit of a pest sometimes.  He is the
ever present protector of his people!

I loved this 4th installment in the series!  Another 5 stars!
I received a complimentary copy.

And what it's about...
Never tell Mac Faraday not to do something.
Spencer's police chief, David O'Callaghan, learns this lesson the hard way when he orders Mac Faraday to stay away from the south end of Spencer's mountaintop - even though he owns the property. It doesn't take long for Mac to find out what lies on the other side of the stone wall and locked gate, on which hangs a sign warning visitors to Keep Out!
Topping the list of the 10 top haunted places in America, Astaire Castle is associated with two suicides, three mysterious disappearances, and four murders since it was built almost a century ago - and Mac Faraday owns it!
​
In spite of David's warning, Mac can't resist unlocking the gate to see the castle that supposedly hasn't seen a living soul since his late mother had ordered it closed up after the double homicide and disappearance of Damian Wagner, a world-famous master of horror novels.
​
What starts out as a quick tour of a dusty old castle turns into another Mac Faraday adventure when Astaire Castle becomes the scene of even more murders. Mac is going to need to put all of his investigative talents to work to sort out this case that involves the strangest characters he has run into yet - including a wolf man. No, we're not talking about Gnarly.
Buy the Book
Amazon  ~  Audible

Posted by MyReadingJourneys at 11:51 AM