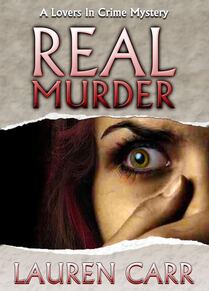 About the book
When Homicide Detective Cameron Gates befriends Dolly, the little old lady who lives across the street, she is warned not to get lured into helping the elderly woman by investigating the unsolved murder of one of her girls. “She’s senile,” Cameron is warned. “It’s not a real murder.”
Such is not the case. After Dolly is brutally murdered, Cameron discovers that the sweet blue-haired lady’s “girl” was a call girl, who had been killed in a mysterious double homicide.
Meanwhile, Prosecuting Attorney Joshua Thornton is looking for answers to the murder of a childhood friend, a sheriff deputy whose cruiser is found at the bottom of a lake. The deputy had disappeared almost twenty years ago while privately investigating the murder of a local prostitute.

And I thought
The 'real' thing a good 'ole mystery!  Lauren Carr gives readers a
plot/storyline that keeps you engaged from page 1 and all the way through the twists, turns, humor and romance.

Real Murder begins with a years old prologue that sets the scene for a present day murder.

The main character Joshua and his new wife Cameron are smart, savy, cunning and human.  Joshua has had quite a career from the Navy to currently the Prosecuting Attorney.  Cameron is equally as talented and experienced.

When past murders and deaths are brought to the present the couple end up investigating a long string of murders, suicides and possible accidents that end up all being tied together.

Real Murder is the second book I have had the chance to read in the series.  I was introduced to Joshua's daughter Tracy for the first time. As well as a newer understanding of his wife Cameron.

As each book in the series progresses each of the characters are developed more and new characters come into the mix.  I love that all the Lauren Carr's series seem to cross over with the characters meeting each other and becoming collegues and friends and even
soul mates (see the Thorny Rose series featuring Joshua Thorntons son and Mac Faraday's daughter).

There are a lot of regular characters and suspects, victims and sub-characters that take a lot of getting to know.  I did have to double check the cast of characters in the beginning.  I could not keep the police chief and medical examiner straight!

If you love a good cozy mystery you'll love all of Lauren Carr's books.  Real Murder is a great cozy read filled with twists and turns and surprises!

I received a complimentary copy.
My review will appear retail sites and Good Reads.
Real Murder will be featured on My Journey Back-The Journey Back and also promoted on Social Media.

Buy the book
Amazon  ~  Barnes & Noble
Visit the tour
Real Murder is being featured as part of the I Read Book Tour
for The Root Of Murder the newest installment in the Lover's In Crime Series.

Click here to visit the tour to read more reviews.