Do you like to grab books as soon as they Release?

Here are a few I've added to my Wish List.

They are all Releasing this week.  I included links!

A pet detective on the hunt for a prominent pooch is found dead, and inn owner Holly Miller has to sort through her guest list for suspects in this all new Paws & Claws mystery in the New York Times bestselling series.
The ladies of the Wagtail Animal Guardians, WAG for short, are in town for a pet adoption charity ball, and Holly is making sure to roll out the red carpet for her special guests. She and her furry best friend Trixie are busy keeping the WAG ladies happy and preparing for the ball when they learn that a retired judge has lost his prized pup.
The venerable citizen has hired a pet detective who has some personal ties to Holly’s new guests. His presence ruffles some feathers, and when the PI is found DOA not long before the ball, Holly wonders if one of the WAG ladies had a motive for murder. To make matters worse, some pet-loving guests of the ball nearly suffer the same deadly fate. Holly and Trixie will have to sniff out the clues and leash a callous killer before they strike again
Available on Amazon
Click Here

Mabel Skinner still hasn’t acquired a taste for growing garlic, but the app developer-turned farmer does have a nose for rooting out killers . . .
Dreaming she’ll someday return to her less pungent life of computer coding, Mabel continues to honor her deceased aunt’s legacy by running Skinner Farm. To make ends meet between harvests, she’s renting out the property’s mercifully downwind lavender field for summer weddings.
Mabel’s first clients are a retirement age couple celebrating their second chance at love in their later years. Hosting a rehearsal dinner with fresh foods seemed like a good idea to promote the farm—until the dead body of one of the wedding guests is discovered. The suddenly departed was the soon-to-be-ex-business partner of the groom, supposedly poisoned by goat cheese hors d’oeuvres provided by Mabel’s neighbor.
Despite the tragedy and the scandal, the groom insists on keeping his wedding date. But with the adult children from the couple’s previous marriages scheming to stop the new union, Mabel’s farm is reeking with suspects. And if she doesn’t uncover the murderer, her goat farming neighbor will get sent to the pen for life . . .
“Growing garlic might be my newest obsession thanks to Six Cloves Under!”
—Lynn Cahoon, New York Times bestselling author of the Farm-to-Fork mystery series
Available on Amazon
Click Here 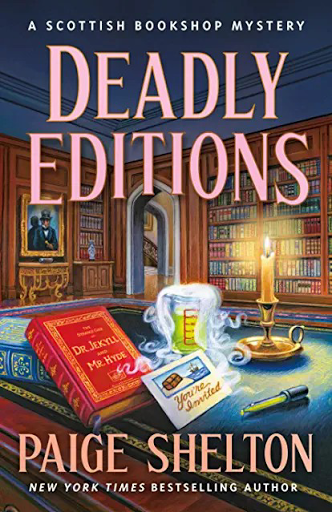 It’s a quiet, snowy morning at The Cracked Spine bookshop, when bookseller Delaney Nichols receives a mysterious visitor, a messenger. He presents her with a perplexing note: an invitation to a meeting with eccentric socialite Shelagh O’Conner, who requests Delaney’s participation in an exclusive treasure hunt. Delaney is intrigued, but also cautious: Shelagh, while charming in person, has a reputation for her hijinks as a wealthy young woman in the ’70s.

These are few that caught my eye.  You see more new Releases over at Dru's Book  Musings.  Click Here

Posted by GranthamLynn at 11:19 AM