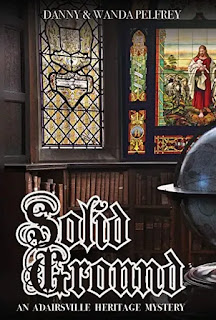 Seven years between them, Kirby and Riley Gordan, nurtured by their pastor father and loving mother, experienced almost ideal childhoods growing up in the Boston area. Then a season of misfortune culminated in the worse of all possible tragedies - the death of their beloved parents.

Four years have passed. Kirby, having failed at marriage and pro-baseball, is now a Florida police detective. He finds himself in little Adairsville, Georgia along with Riley, his law school bound sister. They are there to settle their uncle's massive estate. It is soon apparent that Uncle James's death was no accident. But the worst of it is their names at the top of the suspect list. The siblings are embraced by spunky caretakers, Amos and Carol, whose love, wit, faith, and plain ole horse-sense bolster efforts to solve the murder and put Kirby's life back on track.

I always enjoy getting into a new series at book 1. I was pleased to be offered a chance to be one of the first to read Solid Ground. The authros Danny and Wanda Pelfrey a husband and wife team (and that in itself is intriguing and impressive to me) spin a tale of emotion, tragedy, romance and suspense that actually takes place in their home town. I can only imagine what the 'real' townspeople talk about at the local diner and coffee shop. I always enjoy a book that takes place in a small town. Adairsville as described by the authors appears to be a peaceful quaint town like Mayberry. But peaceful and quiet isn't always the way it is. And like Mayberry fictional Adairsville has a combo Andy and Barney Sheriff that was introduced in the first series the Davis Morgan Mystery Series.Davis another resident of fictional Adairsveille the book store owner makes his way into Solid Ground. I enjoy it characters crossover into new series giving the reader a chance to visit the older characters again in a new adventure.

Solid Ground is well written and is filled with great characters that will worm thier way into your heart leaving you waiting expectantly for the next mystery.

Posted by GranthamLynn at 11:26 AM