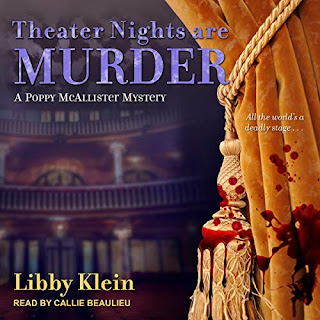 Poppy thought her toughest challenge this winter would be sticking to her Paleo diet and filling all her orders for her gluten-free goodies, but now she has to choose between two suitors. She's not the only one with boyfriend drama. Aunt Ginny's long-ago high-school beau, Royce Hanson, a retired Broadway actor, has returned to Cape May, New Jersey, to star in a Senior Center staging of Mamma Mia. Leaving Aunt Ginny to wonder: What's his motivation?

Slated to open February 13th, the problem-plagued production seems to be cursed - with stolen props, sabotage, and even a death threat. But when a cast member plunges to his death from a catwalk, it soon becomes clear a murderer is waiting in the wings. Now Polly, Aunt Ginny, and a supporting cast must take center stage to catch the killer - before it's curtains for someone else....

A mystery author is charged with murder--and the plot thickens faster than anyone can turn the pages--in USA Today bestselling author Callie Hutton's new series debut, perfect for fans of Rhys Bowen and Ellery Adams.

Two evenings later, as Lady Amy awaits a visit from Lord William Wethington, fellow member of the Bath Mystery Book Club, her former fiancé makes an unexpected and most unwelcome appearance at her house. She promptly sends him to the library to cool his heels but later discovers the room seemingly empty--until she stumbles upon a dead Mr. St. Vincent with a knife in his chest.

Lord Wethington arrives to find Lady Amy screaming and sends for the police, but the Bobbies immediately assume that she is the killer. Desperate to clear her name, Lady Amy and Lord Wethington launch their own investigation--and stir up a hornet's nest of suspects, from the gardener who served time in prison for murder to a vengeful woman who was spurned by St. Vincent before he proposed to Lady Amy.

Can they close the book on the case before the real killer gets away with murder?

Buried by the Sea by Kathleen Bridge (Cozy)

A team of archaeologists is staying at Indialantic by the Sea to study the days of the Spanish explorers, and they’ve stumbled upon a stunning and valuable find at the dig site, but before they can unearth it one of the archeologists finds himself buried in the sand and pierced with diving spear tipped with poison.

Murder in the Family by Lesley A. Diehl (Cozy)

The past comes back seeking vengeance. To save her family and friends, Novice PI Eve Appel, pregnant with her second child, must outwit the bad guys in a final act of desperation, risking her life and that of the man she’s asked to help her, her mob boss friend, Nappi.

She is a reporter at a well-respected newspaper and her teenage daughter is both an athlete and honors student. Though their relationship is rocky these days, Lisa has accomplished what she set out to do. She has given her daughter the kind of life she never had.

Josiah is joined by Shaneika, and her sweet, innocent cousin, Heather, on an archaeological dig at Fort Boonesborough where Daniel Boone led pioneers to the wild frontier of “Caintuck.” At Boonesborough Josiah and Shaneika meet the Dane twins, rich society women, who just rub them the wrong way. However, Heather is entranced by the sisters, having read about them in the society columns and financial pages. That is until Heather catches one of them plotting to murder her identical twin.

When veterinarian and amateur naturalist Jasmine Garr is shot in her yard, residents of Shell Island press caterer River Holloway into investigating the homicide. River dons her amateur sleuth cap and sets out to discover who killed her former catering customer. Between Jasmine’s estranged cousin, a rival veterinarian, a wild animal trapper, the chicken lady, and a real estate broker, River has plenty of suspects to consider. .

On tour at Great Escapes

Nature breeds new life with the sign of Spring in the air in Leavensport, Ohio, and Jolie and Ava find their new families’ lives turned upside down! With properties in Leavensport beginning to sell, Nina Sanchez opened a bakery after purchasing the lot next to M&M’s Italian restaurant. She is new to town and swears to Ava and Jolie she has no connection to the Dominican Republic Sanchez mafia family.

On tour at Great Escapes

Posted by GranthamLynn at 2:04 PM