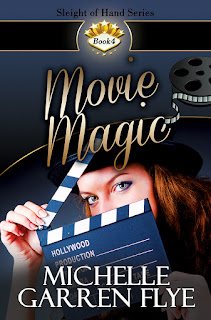 About the book
Lights…camera…magic!

Sabrina Parker has spent her professional life creating unbelievable stunts and magical effects for movies and stage magicians. Now she needs some special magic to help her bring her movie to life. Her search leads her to the very unlikely stage of Walt Bryson, host of a long-running children’s television show in Beaufort, North Carolina.

Walt isn’t terribly happy about taking Hollywood’s call. He’s never sought the same notoriety as his colleagues Ian Logan and Andre Hawke. But there’s something about the beautiful, levelheaded Ms. Parker, and when he reads her screenplay, he knows he wants to work with her. For the first time in years, he’s willing to put tragedy behind him and make real magic.

Can Walt and Sabrina use love as their guide or will their past mistakes haunt their future?

Read an excerpt
What the hell kind of place was this town that she could be kidnapped off the street and carried off into a dark alley?

“Ouch! Hey, lady, the screaming’s good for effect, but I could do without the kicking!” The man who’d grabbed her smacked her bottom to get her attention. “Cut it out!”

“Put her down, Cal.” An amused voice from next to them made Sabrina freeze.

“Walt?” She craned her neck to try to see him.

“Gladly.” The man holding her swung her down over his shoulder, setting her none-too-gently on her feet and backing away.

Sabrina regained her balance and glared at him, then turned to see Walt, practically doubled over laughing and standing next to a girl in short shorts who looked just as amused. She whirled back to look at her kidnapper, realizing as she did that he was actually only about eighteen and wearing a pirate getup that made him look like a poor imitation of Jack Sparrow.

Walt, on the other hand, might have stepped right out of a movie. He wore a brocade vest over his tanned bare chest and his head was wrapped in a red scarf. Several rings decorated his fingers and he wore a gold chain with a medallion. His shoulder-length dark hair and beard completed the look to perfection. Sabrina fought off her attraction by embracing her irritation at the whole incident. “Would anyone like to tell me what the hell is going on here?”

And I thought
I love a good romance.  And, Movie Magic is just that.
The characters are charming and entice you into their story.
This was a rather fast read.  Which some days can be good.
It's good when you want to get to the end without a lot of just page turning.
Although Movie Magic is book 3 it reads as a stand alone.

I enjoyed this book so much that I would love to read the others in the series.