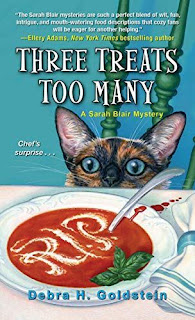 When a romantic rival opens a competing restaurant in small-town Wheaton, Alabama, Sarah Blair discovers murder is the specialty of the house . . .

For someone whose greatest culinary skill is ordering takeout, Sarah never expected to be co-owner of a restaurant. Even her Siamese cat, RahRah, seems to be looking at her differently. But while Sarah and her twin sister, Chef Emily, are tangled up in red tape waiting for the building inspector to get around to them, an attention-stealing new establishment—run by none other than Sarah’s late ex-husband’s mistress, Jane—is having its grand opening across the street.

Jane’s new sous chef, Riley Miller, is the talk of Wheaton with her delicious vegan specialties. When Riley is found dead outside the restaurant with Sarah’s friend, Jacob, kneeling over her, the former line cook—whose infatuation with Riley was no secret—becomes the prime suspect. Now Sarah must turn up the heat on the real culprit, who has no reservations about committing cold-blooded murder . . .

Includes quick and easy recipes!
And I thought
I knew I would enjoy this one the third in the series that I've enjoyed the .from book 1.  The quaint and cozy little  town of Wheaton seems to be a picture perfect setting.   But it isn't quite as cozy as the town folk would like because it seems everywhere you turn someone's met their maker and Sarah (the main character) ends up having to put her sleuthing skills to work to  help family or friends that end up being the accused murderer.
In 3 Treats . . . Sarah is asked by the council woman & who's running for mayor to prove her brother didn't kill off his on-again girlfriend.
The story lines and development of  the main characters seem to get better and better in this Cozy series.
Each book has a new and different mystery to solve and the reader is kept interested to the end.

I love this series.  Check it out.

I received a complimentary copy.
My review will appear on Amazon, Good Reads and
promoted on social media.

To read reviews and guest posts and enter the Giveaway visit the tour.  Click here.