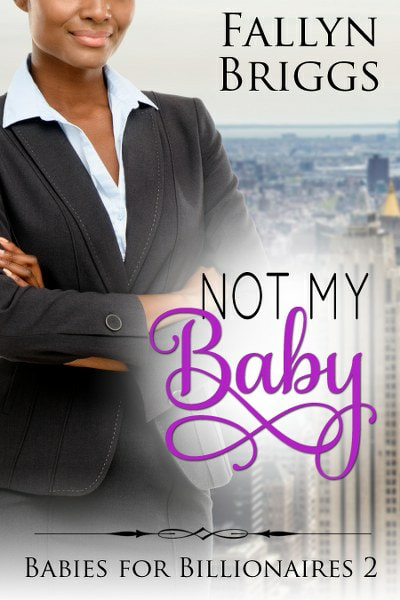 Not My Baby
Babies For Billionaires Book 2
by Fallyn BriggsGenre: Sweet Romance

About the book
Some women are hired for their looks… Sydney Campbell wasn’t one of them.
Unbeknownst to her, Sydney Campbell is hired because CEO Grayson Carter believes she has no chance of turning his incorrigible son’s head. Aiden Carter is young, handsome, and set to inherit his father’s billion-dollar company. He also has a habit of dating his assistants.
But Sydney has as much time for rumors, taunts, and bad reputations as she does for relationships, love, and babies.
As in none.
She has her own demons to battle, a father who relies on her, and a plan that says working for Aiden Carter is just a stepping stone in her climb to the top of the marketing ladder.
She will not date Aiden. She will not fall in love with him. And she will most certainly not have children with him… right?
Not My Baby is a sweet billionaire romance with no bad language or sex scenes. Of course, there is also a Happy Ever After. Grab your copy now!

And I thought
If you like a good clean romance you'll find it with this one.
Not My Baby was a quick read a mere 200 pages but there is a lot to this one.
Although I was confused by the name;  I was expecting Aiden to disclaim a child.  But he didn't in fact he steps up and takes complete responsibility.  Which causes his new and budding relationship with Sydney to come to a complete and sudden halt!
That is all of the story I'll give away.
Fallyn Briggs gives the reader a story that is a great page turner.
I was engaged from the beginning all the way to the end.
All of the characters are fun and like able.  Sydney has some great girl friends full of good advice.
If you like a romance with a good story check this one out!
There are no bedroom scenes.  My Mama would enjoy!

I look forward to reading more from Fallyn Briggs and more in the Babies For Billionaires Series.