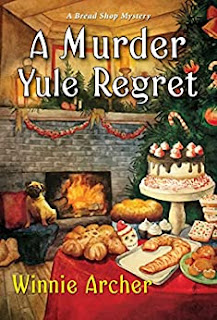 About the book
Freelance photographer and Yeast of Eden bakery assistant Ivy Culpepper has just scored the job of a lifetime shooting the Dickensian dress-up X-mas party thrown by It Girl film actress Eliza Fox . . . until an unwanted guest appears.
A holiday costume party in the sleepy coastal town of Santa Sofia could be just the boost Ivy needs for her fledgling photography business. At the party, Ivy enters a Victorian fantasy come to life, all courtesy of the fabulous Ms. Fox. Ivy gets to play shutterbug while hanging with Scrooge, Marley, the Cratchits, and more classic Dickens characters. But what begins as the best of times turns out to be the very worst for one of the party guests—a tabloid journalist with more enemies than Ebenezer himself.
When the man’s body is found sprawled across the jagged rocks below the house, the fingers begin pointing at Eliza. Meanwhile, Ivy gets roped into helping prove the starlet’s innocence. Her festive photos are now official evidence—and the Ghosts of Christmas Present could mean the party for Eliza is over, once and for all.
And I thought
One of the best from this series!
It might just be the holiday be theme.
Prob the Dickens party theme for sure!
Author Winnie Archer never disappoints with this series!
With each one I am enamoured with the series cast.
Filled with a bit of fantasy and nostalgia the costumed characters provide a few suspects, details,clues and evidence to be  unraveled.
I loved the cover.  Watch out for those holiday cookies!  Does the Santa Skull hold a clue?
A Murder Yule Regret  gave this readers hours of pleasant page turning.
I love this series.
I received it a complimentary copy.
My review be will appear on Amazon and Good my Reads.
Buy the book
Visit the tour