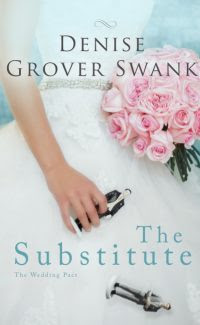 About the book (from authors website)
Megan Vandemeer meant  to tell her parents about her broken engagement, but a month and a half later she finds herself boarding a plane home to her wedding. Having stretched avoidance to its limits, it’s to come clean–a terrifying prospect since her mother is sure to blame her rather than her cheating, emotionally frigid ex. A couple of drinks and two Dramamine later, Megan finds herself spilling her sob story to the tall, dark, and handsome stranger in the seat next to her.
With only one week left to save his business, Josh McMillan boards a plane to Kansas City in a last-ditch effort, leaving the details to chance. An unexpected answer is delivered in the form of the beautiful brunette beside him. Though she’s completely loopy, her honesty, openness, and humor charm him. So when she passes out before landing, he helps her off the plane–a good deed that leads to a colossal misunderstanding. Her parents assume he’s her fiancé. In a twist of fate, the mix-up might help Josh save his business, so he plays along, figuring he can help Megan too. All he has to do is stage a public break up convincing enough to appease her mother.
Josh is only supposed to be a substitute groom, but the more time he and Megan spend together, the more their pretend engagement starts to feel real…and the less they want to break it off. Can a relationship that began as a farce turn into happily ever after?
About the series . . .
The Wedding Pact is a hilarious, New York Times bestselling series based on the lives of three friends who received a curse from a fortune teller when they were kids. The curse, that each of them will marry before thirty, have a disaster of a wedding, and end up with a man other than her original fiancé, works its way into the lives of Megan, Blair, and Libby causing utter chaos and the occasional wedding.

And I thought. . .
I enjoyed The Substitute Groom.  I read the book on my phone using the Kobo app.  It was a free title.
I enjoy a good 'ole sweet romance.  I got what I like.  The story is fast paced and only happens over a few days.  Making it a little unbelievable but that's o.k.
The story is about Meagan who can't seem to tell her mother that
she broke her engagement six weeks ago.  She accidentally meets Josh on a flight to Kansas City for her wedding that isn't going to happen or so it seems.  Opp's.  After taking Dramamine and drinking a little too much on the flight she ends up telling Josh her sad break up story and about her fears to break the news to her parents.
The plot thickens.  It wouldn't be fair to tell you more.  You'll have to read it.

Josh and Meagan are delightful.
The other characters are quirky and fun.  Meagan's two best friends both have very different personalities and opinions about Meagan and Josh.  One is for them 'getting together'.  The other goes overboard trying to find 'dirt' on Josh and send him packing.

Meagan's mom and grandmother are both a bit crazy and funny.
There is a lot of humor and scenes that might just crack you up.

There are a few bedroom scenes that don't actually happen in the bedroom.

Overall this was a good story.  I am looking forward to reading the remainder of the series.

I read this book on my phone using the KOBO app.
I was not asked to review this book.