Vangie Vale and the Murdered Macaron by R.L. Syme Review/Interview/Giveaway

About the book (provided by Great Escapes Tours)
Small towns and gossip go together like flaky crust and sweet pastry cream. Between the police scanners, social media, and the senior center, it’s like a zombie apocalypse where the undead consume people’s secrets instead of living flesh.
But Vangie Vale wants nothing more than to stay under the radar…especially the police radar.
So when her new bakery becomes linked to a murder investigation, nothing will stop the gossip mill from connecting her to the dead body. Can’t have that.
Forced into the role of investigator, this new-in-town bakery owner has to become the very thing she hates–a nosy, small-town gossip–in order to clear her good name, and keep her face off the front page. But when a dating debacle brings her face-to-face with the Sheriff, Vangie can’t ignore the fact that one of her macarons was involved in a murder. She has to find the who-dun-it.
And I thought
I love getting into a new series.  Vangie Vale promises to be
quite the sleuth!
I enjoyed this book from my step into her bakery!  It might have been the book cover that drew me in.
But it was the story and plot that kept me and lured me all the way to the end.  Which was a little too soon!   I can't wait for book 2!
It doesn't take long for things to heat up when a body is found lying next to a box from Vangie's bakery.
The town sheriff seems to have it 'in for' Vangie and is just waiting to 'interview her downtown'.
With the little interview tying the purchaser of the macaron's to a visit to town that happens to be more of a home boy than visitor passing through.  Before all the clues come together our visitor
hangs himself in his cell.
Is it really suicide?  Vangie wastes no time in investigating.
There is no lack of suspects once gossip and rumors begin spreading around town.
From the suspicious acting sheriff, the agent, the widower, and even the teenager that visits the bakery every afternoon.

If you like a cozy read this is a great read and a fast paced ride!And it's book 1 of  a new series!

For a little behind the scenes check out my interview below. 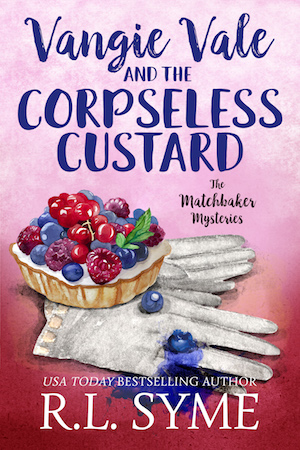 Interview with the author
Hello I am so happy to have you here at the blog!  Did youhappen to bring any treats?   We should have invited Vangie.
We really should have invited Vangie. :) She's a *much* better baker than me. But because I now have the Big Sky Bakery on speed dial, I can get my macarons much quicker. Have you considered including recipes in the MatchBaker Series?
We do, now! And I'm so excited about them. We're actually partnering with a local bakery here in Bozeman (the inspiration for Madison Falls in the book) called the Big Sky Bakery, and they are going to do all the recipes for us. I'm so excited to say that we have a lot of great recipes cooked up for the books in the future.
I know that Vangie is located in Montana where you live but can we expect any visits back to Raleigh in the future for maybe a little back history?
I absolutely am hoping to get to Raleigh very soon. In fact, one of my best friends lives not far from Raleigh. We went to Seminary together, and I've been there to visit her so many times. I absolutely adore North Carolina.We really jumped right into the crime in Murdered Macaron didn’twe?    Was your intention for a fast paced thrilling ride?
I definitely was hoping for that, so I'm glad it felt that way. This book has been percolating in my mind for *so* long, and it was so much fun to solve this mystery with Vangie.Speaking of ride’s (inset wink)  I won’t give anything away from the story but…I was surprised at who Vangie ended up sleuthing with.How did you come up with the combination of Vangie and Derek?
Yes, I was so excited to have Derek join her for her sleuthing. It made a lot of sense, given his connection to the victim. (wink) Actually, the combination of Derek and Vangie surprised me, too! I had no idea, when I started, that she would end up having such an interesting partner on the journey in this book. I always intended Derek to...have a different role in this book, let's say. So I was immensely excited to write the two of them finding clues together.Now that Derek really doesn’t have a place to live will we be seeing him around town again?
We will absolutely see him around town again. In fact, he will make another appearance in Book Two! (No spoilers, of course, but he's definitely on his way back to Saint Agnes...)Was it always your intention for Henry to meet his maker or did the plot just develop that way? I have to admit in the beginning I was as intrigued with Henry as Vangie was.  I hated to see him killed off.  Maybe it could Be written into a dream and he could return …
Actually, that was also a surprise. Part of what I love about mysteries is that I sort of start off, like the readers, having the intention of Vangie and Henry, and then....I got surprised by what actually happened. I think that Henry will return (not literally, of course, but in another way...) in a later book, though. I don't want to give too much away, but I'll just say...we haven't seen the last of Henry's life and times.
Did any of the characters have you a little smitten?
Honestly, I am so in love with Derek. I didn't expect to be. But I totally am. As a "watcher" of Vangie's world, I can't help but approve of a man who's so dedicated to his wife's memory that he's willing to put his life on the line for it. I don't know how Derek's story will play out, but I do feel like we'll see a lot more of him. If only so I can hang out with him again. :) I myself was not smitten but sure wanted to know what is up with the sheriff/neighbor!Did I pick up on a little simmer spark between him and Vangie?
That is a fantastic question. There's definitely something going on between the two of them. I won't give any spoilers, but I will definitely hint that there's much more to their neighbor relationship than Vangie realizes. In many ways, Malcolm will come to be one of the most important characters in the series.Speaking of plots I know you’ve written a bunch do you ever come up with a plot in a strange place or while doing something like eating macarons?
Actually, the concept for the plot for Macaron while eating a macaron. :) That happens to me a lot, where I'm doing or eating something, and I think, "how would someone die...." etc. I may be slightly insane. :)What or Where is the strangest place you’ve been inspired?
Hmmm. That's a great question. Probably a haunted house. (Not like a "novelty" place, but a real house that was supposedly haunted. When I was younger, that was where I came up with the idea for my first novel, The Outcast Highlander, because of the old, dilapidated house I was in at the time that turned out to be haunted. I did not see the ghosts myself, but my best friend's aunt insists that she's seen them. Hmm....Our visit with Vangie was a cozy fun ride.  I am looking forward to Books 2 and 3!
Thank you so much. So am I! I think Corpseless Custard is going to be even better than Murdered Macaron and I can't wait for it to come out!

Thanks so much for having me, and thank you for reading. I had a great time as your guest.