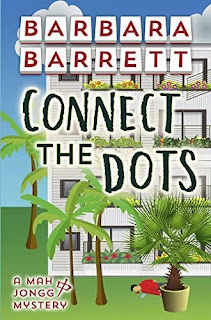 About the book
How could a thirty-something man fall to his death from a fourth-floor balcony he knows is defective? That’s the question freelance writer Micki Demetrius is asked to answer by the man’s grieving mother, Clarissa White, who refuses to believe his death was an unfortunate accident. But when the authorities determine it was homicide, Micki is shut out of her investigative efforts.
Giving up is easier said than done for Micki. She can’t resist a mystery, and suspicious characters won’t leave Clarissa alone, from the woman claiming a stake in the victim’s life to a cagey character who wants his business. As the threat to Clarissa grows, Micki feels compelled to help her in spite of the danger.
Micki’s three mah jongg pals—Sydney Bonner, Marianne Putnam and Katrina, Kat, Faulkner—are drawn into the mystery, but the retirees have their own challenges. Syd and husband Trip do grandparent duty while their daughter deals with marital issues. Marianne “finds herself” by writing a one-act play. And Kat must decide how public to go with her growing friendship with the sheriff. Together, they must connect the dots in a nefarious web of greed, neglect, secrecy and murder.
And others are saying
This is another great book that showcases friendship possibly even more than murder!~A Wytch’s Book Review Blog
Connect the Dots by Barbara Barrett is a five-star read that kept me entertained and wanting to know what happens next . . . Ms. Barrett’s mystery, characters, and the setting were fabulous.~Baroness’ Book Trove
I have to say that Barrett does a remarkable job of keeping the reader guessing as the story unfolds. The use of an older set of characters is quite nice as well for a change.~Books a Plenty Book Reviews
This book is a fun and entertaining mystery that I enjoyed from beginning to end. It’s filled with interesting, realistic characters and a plot that will keep you turning pages all the way to the reveal at the end.~LibriAmoriMiei
And I thought
I just love this fun and funny series.   Barbara Barrett indeed has given us a
5 star series.  And another 5 star read in book 3 of the Mah Jonng Mystery series
Featuring Sydney Bonner and her group of buddies.
The girls are a fun group and their significant others and husbands bring some humor
to their adventures.
Personally I am rooting for Kat and the Sheriff.
Although each of the books are written as a standalone I think the Cozy Mystery
Lover would be hard pressed not to want to read them all in order.  This is series would make a great long weekend read.
I have enjoyed each and everyone.
I received a complimentary copy.
My review will appear on retail sites, Good Reads and Social Media.
Buy the book
Amazon   B&N