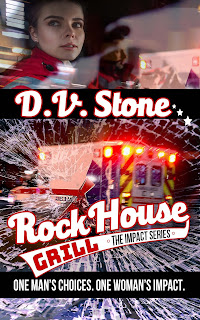 Aden House, successful but driven chef and TV personality, refuses to slow down. His life implodes one night, damaging him both physically and emotionally. He's rescued by a woman he thinks of as his angel.

Shay McDowell has rebuilt her life after her divorce. She juggles volunteer EMT duties and her job, while dreaming of becoming a chef. She finds her way to Rock House Grill and back into the life of the man she helped save.

Can love be the ingredient needed to survive the many obstacles they face?

“Easy, you’re going to be okay.” A soft voice eased through the chaos around him. The owner of the voice grabbed his arms and held them in a firm but gentle grip. “I’m right here with you. You are not alone.” “Can hardly m-move.” His voice slurred. “C-can’t see anything.” “You’ve been in an accident. I’m an EMT with the ambulance squad,” the velvety voice calmly explained. “You can’t see well because we’re under a tarp. Hold still, okay?” “‘K.” A small light flickered at the edge of his vision. It shone into a bag next to him. Penlight. “You’re restrained to a board. It’s to keep your head from moving and causing more injury.” She continued to talk to him. The voice reached down somewhere inside him, calming and peaceful, so he focused on it. A glow from spotlights on the outside lit whatever covered them. The shadow gave the woman the appearance of a halo—like an angel.

And I thought
I really enjoyed Rock House Grill.  Honestly it was not what I expected.
I kind of expected your typical Romance/Suspense.  The same 'ole Hero running around trying to keep the girl safe while falling in love with her along the way.
And that is what you get and alot more.
What I didn't expect was no bedroom scenes.
What I didn't expect was no language.
And well it was a darn good book anyway.
Which is what I Like.
The author spins a story that keeps you interested and turning the pages.
For me it was a bit slower in the beginning as the stage is set for the Romance but it isn't long before things start going hay wire and there are people assaulted, houses ransacked and cars keyed.
All the chaos though just seems to take a back-burner to the rest of the story(s).
The characters are well developed.  As I read I could see the author wasn't just writing a story.  She had some knowledge of the restaurant  business and the medical field.
My biggest surprise was that D.V Stone allowed her characters to share their faith and trust in God without making the topic offensive to anyone.
For me that made this book even better.
If you enjoy a good clean Romantic Suspense you need to put this one on your TBR pile (not list because you need to buy it.)

I received a complimentary copy.
My review will appear on retail sites
good Reads and on My Journey Back -the- Journey Back blog and promoted on Social Media.