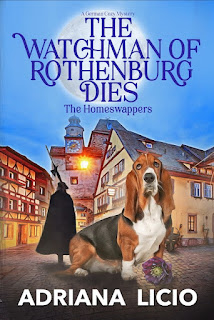 About the book
A holiday is a time to relax, unwind and see the sights. But for two adventurous sexagenarians, the sights have a tendency to include dead bodies.

Etta and Dora, both newly retired teachers, travel from their home in Southern Italy to a fairy-tale German town for their first home swap holiday, delighted by their neighbours’ warm welcome. But the welcome turns sour when the Night Watchman of Rothenburg is brutally murdered while his tour group takes photographs nearby, a halberd buried in his chest and a peculiar iron mask by his side.

When the murderer claims a second victim and the son of their hospitable neighbours becomes the number-one suspect, Etta’s analytical mind goes to work. Why was a shame mask left at the scene of each murder? Is there a clandestine trade going on behind the scenes of apparently upstanding local businesses? And why does every lead take her back to the sinister Devil’s Ale pub and the terrifying gang who lurk within?

Meanwhile, Dora has a puzzle of her own – how can she persuade Etta that a loveably disobedient Basset Hound called Napoleon is now a permanent part of their lives?
◆◆◆ Pack your bags, jump into the backseat of Etta and Dora’s old Fiat 500, and join them on their travels around Europe. There’ll be mystery, murder and mayhem aplenty wherever they go. ◆◆◆

And I thought
By the end Adriana Licio had a new fan.  I am anxiously waiting for book two.
I have to admit for a bit I was really disliking one of the characters.  I had a hard time keeping Dora and Etta straight.
I don't want to give any thing away.  But one of the main characters  wasn't too keen on taking in the Basset Hound Leon (short for Napoleon) after his owner was murdered.  I mean seriously did you see the cover.  Leon just melts your heart. And the cover of book 2 will 'get you' also!
I enjoyed the story it was fun going along with girls on their tour of the quaint German town.  And then not only is there one murder to solve but 2!
And before the 2nd one is solved the murderer goes after one of the girls and Leon!
It was easy to turn the pages to solve the murder all the while hoping for a Happy Ending for all.
I couldn't help but be reminded of Murder She Wrote at the end as the girls and the police explain to the neighbors and talk over how and why the murderer began his crime spree.
I enjoyed The Watchman Of  Rothenburg Dies.  Book 2 is on my TBR list.
I received a complimentary copy.
My review will appear on Amazon and Good Reads.
The book and The Great Escapes Tour will be promoted on social media.
Buy the book