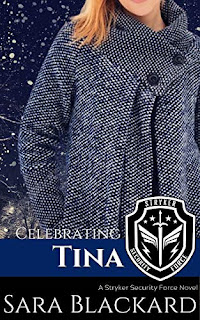 A K-9 handler determined to prove she belongs. A detective with an unwavering plan. Can they overcome their painful pasts and accept the gift of love?

Tina West has spent her life feeling like she stood on the outside, but since taking a job at Stryker Security, life seems to be turning for the better.

Tina never imagined when she took a job as a nanny she’d end up training for search and rescue. Yet, when her boss shows up with a retired military dog and the opportunity to train with him, Tina snatches up the chance to help those who are lost. If she saves enough people, maybe she could find meaning in a life that left her with nothing but a bruised heart and a tarnished picture of family. As holiday festivities loom before her, she wonders if she’ll ever shuck the regrets that haunt her dreams and keep her from connecting with others.

Milo Bishop’s every move has been to take care of his mom and younger brother.

Since his father’s murder, Milo has worked hard to make sure his mom and brother were provided for. He joined the police force straight out of high school, took night classes so he could move up to investigator, and put his life on hold until his brother graduated from college. But when he is rescued on Thanksgiving Day by Tina West, his well-laid plans take a sharp detour.

When a series of kidnappings threaten to ruin the holidays, can Tina and Milo put aside their doubts and find the abducted children before it’s too late?

Can Tina trust her instincts when they’re put to the test or will children being harmed hit too close to her past for her to deal with? Will Milo put his desires above his family’s needs when a chance at love catches him by surprise?

A series that I really like.  I was excited to get the chance to read Celebrating Tina.

Because I enjoy Sara Blackard's stories, plots and characters the books in this series is are always a fast read for me.

I love how many of the characters in the series make Cameo appearances in each book.

The characters in the series are all part of Stryker Security.

Each of the books in the series is a Romantic Suspense featuring one of the characters.

Tina ends up joining the group as a Nanny for Eva who loves Princesses and thinks everyone is a Princess.  She has several Uncle's in the group that she wraps around her finger.

Tina story is as fast paced as all the other books.

The topic of missing children might give you pause but I will give one spoiler . . .

There is a Happy Ending

I enjoyed Celebrating Tina!  I look for ward to the chance to read the books I have missed and the next book in the series.

Excerpts of my review will appear on Amazon and Good Reads.

Posted by GranthamLynn at 1:32 PM