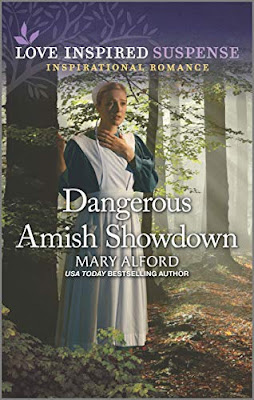 Dangerous Amish Showdown by Mary Alford
Under siege in Amish country…
She must fight for their lives.
Gunshots shatter Willa Lambright’s placid Montana evening—and that’s before she discovers on-the-run lawman Mason Shetler on her doorstep. Willa hadn’t glimpsed her childhood friend since he’d turned his back on Amish country years before. Now the US marshal’s returned with an injured partner, a young witness he must protect at all costs…and vicious Mafia agents dead set on making sure none of them survive.
From Love Inspired Suspense: Courage. Danger. Faith.

Falling For the Lawman by Claire McEwen

They made a great team…

But how long can they last?

Shelter Creek deputy Adam Sears wasn’t pleased about his temporary new partner. Anxious to catch some poachers, wildlife officer Gracie Long took too many unacceptable risks. Yet after learning Gracie had been through a trauma, Adam was determined to make this relationship work. But as a single father of two young kids, can he trust his family with someone so reckless once the assignment is over?

Book 1: Reunited with the Cowboy

Book 2: After the Rodeo

Book 6: Falling for the Lawman

A terrible tragedy nearly broke him.

Can love put him back together again?

Widowed history teacher Neil Hamilton has lost his way—at work, with people and even with his faith. But Neil's shut-down existence is disrupted when a small toddler and his would-be foster mother, vibrantly pretty Maggie Byrne, come crashing into Neil's yard and his life. Can this absentminded teacher find himself again…and take a chance on love, too?

From Love Inspired: Uplifting stories of faith, forgiveness and hope.

Sweet Afternoon by Jessie Gussman
Willen Hawkins knew exactly what she wanted to do with her unexpected inheritance: use it to fix up the Indigo Inn at Blueberry Beach.
After all, it’s been more than eighteen years since she graduated from Blueberry Beach High and left town.
The life she’s created for herself is far more lonely than the life she’d envisioned for herself as a teen. But if she wants to reinvent herself and start building the life she wants, she has to stop waiting for everything to be perfect and start now.
Drake Jensen wants to disappear.
Being voted the sexiest man alive for the past five years, starring in eight of the top ten highest grossing movies of the last decade and being the most sought-after leading man in Hollywood didn’t keep his wife from running off with the nanny, taking his kids and destroying everything he’d thought he’d been building.
Hiding out at a newly opened inn that no one has heard of before and getting a job as a laborer should keep his identity under wraps.
He’s not staying.
But he hadn’t planned on the town being so supportive nor on falling in love with a woman who is determined to make him her enemy.
Can Willen learn that she doesn’t need to be perfect in order to be loved? Will Drake be able to choose between Hollywood and the new life that could be his?
Books in the Blueberry Beach series:
Yesterday's Treasures
Tomorrow's Blessings
Beautiful Forevers
Precious Memories
Misty Mornings
Sweet Afternoons
Available on Amazon
Click Here

No Grater Crime by Maddie Day
Robbie Jordan’s Pans ’N Pancakes boasts delicious eats and the best vintage cookware finds in South Lick, Indiana. And now, for a limited time, there’s a new special featured on the menu—murder!
Ever since meeting the wary owners of an antique shop opening across the street, Robbie has been scrambling to manage weird incidences plaguing her café and country store. Pricey items vanish from shelves without explanation, a fully equipped breakfast food truck starts lingering around the area each morning, and loyal diners mysteriously fall ill. When an elderly man dies after devouring an omelet packed with poisonous mushrooms, Robbie must temporarily close down Pans ’N Pancakes and search for the killer with a real zest for running her out of business—or else.
Includes Recipes for You to Try!

Frontier Secrets by Anna Zogg
A woman seeking a new future.
A cowboy with a shadowed past.Untamed Wyoming is nothing like polished, restrictive Chicago—that’s why Ellie Marshall likes it. On her uncle’s ranch, she’s free. Free to practice her calling in medicine. Free to finally connect with her uncle. Free to explore her feelings for mysterious cowboy Rhett Callaway. In this strange place, Rhett is her constant—the one she trusts to help and protect her…especially when sinister machinations on the ranch come to light. But will Rhett’s murky past drive him away just when Ellie needs him most?
Available on Amazon
Click

Christmas Comes to Morning Star
by Charlotte Hubbard
For fans of Beverly Lewis and Cindy Woodsmall comes a new Amish inspirational romance set at a most joyful time of year--Christmas!—in the heartwarming community of Morning Star, Missouri, with its mouthwatering marketplace, close-knit community, and blessings for everyone—even enterprising, noodle-making, unmarried twin maidels who’ve given up on love and families of their own.
Founded by five unmarried and enterprising Amish maidels, the new Morning Star Marketplace in small-town Missouri is preparing for a joyous Christmas season. But will the holiday also bring unexpected tidings of love?
Twin sisters Molly and Marietta Helfing are eagerly anticipating Christmas, with Marietta fully recovered from cancer and their noodle making business thriving. But Molly clearly misses having former tenant Pete Shetler and his rambunctious dog, Riley, around. Marietta can’t ignore Molly’s feelings for Pete—or the anxiety it stirs within her. Convinced her illness has made her unmarriageable, Marietta wonders what kind of life she’ll have if her sister marries—despite Molly’s promise to never leave her behind. . .
Then a fire destroys the home of Amish neighbors and Molly and Marietta graciously make room for widower Glenn Detweiler, his dat, and his two young boys. When Pete returns to help the family rebuild, Molly relishes her reunion with the handsome carpenter, while Marietta delights in mothering Glenn’s boys—and is surprised by her poignant bond with their quiet, brooding father. Soon everyone is wondering if this season will bring the blessing of a merry double wedding to Morning Star . . .
Available on Amazon
Click Here

Murder with Orange Pekoa Tea
By Karen Rose Smith
In Pennsylvania’s Amish country, Daisy Swanson is serving hot tea at a fundraiser for a homeless shelter—but tempers are getting heated too . . .
Daisy’s orange pekoe is flowing at a fundraiser—and she’s also made a new friend, Piper, a young woman whose hopes for motherhood were dashed by a foul-up at a fertility clinic.But before they can settle into a long conversation, the event is disrupted by masked protestors who object to building a shelter in Willow Creek. Among the angry crowd is Eli—who left his Amish community some time ago, with help from a lawyer named Hiram.
It just so happens that Hiram is also representing the fertility clinic in a class-action suit—and soon afterward, he turns up dead, felled by an insulin injection. Daisy can’t help but get drawn in, especially since Piper’s husband had been pretty steamed at the victim and didn’t hide it. She’d love to spend some time with the dog she and her boyfriend have just adopted—but first she 'll be straining to find a killer . . .
Includes delicious recipes!
Available on Amazon
Click Here
Posted by GranthamLynn at 12:32 PM