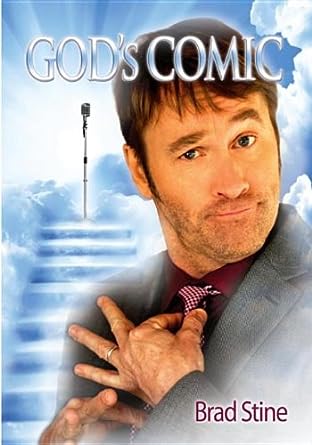 About the DVD (provided by FishFlix)Join Christian comedian or “God’s Comic” Brad Stine for 70 minutes of laughs as he studies the world and brings his own unique comedic insights straight to you. Stine has a unique blend of stand-up comedy with just a tinge of preaching and lecturing that will have you laughing out loud but also contemplating your own actions and life. Dedicated to more than just making you laugh, Brad Stine gets serious in moments to challenge you in your faith and your own personal beliefs. He is a man sold out to God and has chosen to use a unique platform to communicate his message: comedy!

Filmed before a small, intimate audience, Brad runs through his routine, showcasing some of his most hilarious routines to date including “Small Town”, “G-O-D”, “O Is for Our Fault”, “Texting and Cell Phones” and “Holiday of Extortion”. Similar in style to other Christian comedians like Tim Hawkins and Mark Gungor, Brad Stine is a hilarious comedian well-versed in the art of making your sides split. In a culture that generally downplays faith and God, Brad Stine helps to bring to light some of the undeniable truths of our Lord and Savior while also making you laugh at some of the oddities of our modern culture.
For more about Brad Stine visit FishFlix here
And what I thought . . .
I'm a little undecided about how I felt about the DVD.  To me it was a little long.  But there is good in bad in that.  You can actually turn it off if you want and do something else so that is good.
It is good clean family fun.  Small children will be lost but high schoolers would enjoy.  In fact there is a 16 year old in the audience that is actually part of the entire show.
This is the part that I'm uncertain about.  I guess it really wasn't what I expected having seen other comics in large venues.
I kind of had the feeling of a comedy club.  Very small intimate group.
Again that is neither good or bad.  Just a thought.
Overall I'd recommend this video.  It would make a great family Christmas present.  I'll probably purchase for my son and his family.
I wish I could say it was great.  I have to say it was good.  And worthy of a watch.

I received a complimentary copy from FishFlix in exchange for my honest opinion.

This DVD is available at Amazon, Barnes and Noble and
CBC .  This review is posted at all the above retailers.

Posted by MyReadingJourneys at 4:42 PM