In this story of protecting others on the border and the heartache of relationships you will find yourself in the lives of those who have sworn to uphole law, no matter the cost. 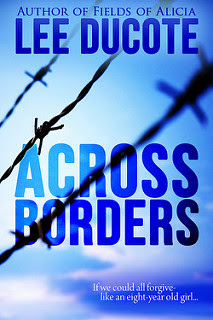 About the book (provided by Lola's Book Tours)
In Across Borders, Lawson Caine, a seasoned Border Patrol agent, is stationed in Presidio Texas with legendary lawman Capt. James Garrett. Lawson, who is from a long linage of lawmen, has gained the respect and reverence from his team, Dale Chanson, Terry Bennet, and the crazy member, Alex Sweeny.
Lawson never expected anything to come between his dedication with the Border Patrol and his brotherhood with Sweeny until he meets local pharmacy owner, Lia Gonzales. Against her father’s wishes Lia continues to see Lawson not realizing the inevitable consequences.
In this story of protecting others on the border and the heartache of relationships you will find yourself in the lives of those who have sworn to uphold the law, no matter the cost.
And I thought
I was only a few pages in and two things crossed my mind


I was right on both thoughts.
This was a super fast pace thrilling road across the dusty roads of Texas and Mexico.
I immediately feel in love with all the characters.  Back to those first thoughts.  I knew one of them wasn't gonna make it to the end.  A very small part of me didn't want to find out who.  But another
part the bigger part didn't want the story to end.
Even at the very end I wished that there was more.

The subject/plot of the book is about Texas Border Agents fight against immigrants and the despicable Coyote's that prey on the poor people that are trying, praying and willing to do anything  for a better.
About 3/4's in the is a part that describes a ritual that the Coyote's
perform.  It is graphic in nature.  But the subject is unsettling because it is true and really happens.

There is way more to this plot/story than the fight to control the borders.

There is a reverence and respect to God that I was not expecting.
Although the main character Lawson and a few his buddies played basketball on Sunday instead of going to church. (until a couple of girls 'lured"them into the services) And didn't really have much of a practising faith their Captain 'Cap' who considered the 5 men on his 'team' encouraged them.

This underlying theme made the book even that much more appealing to me.     I love suspense.  I love thrillers.  And I love romance.  Across Borders was much more than I expected it was a story filled with suspense and romance and was just a great book to read.
The best party?  The good guys win.

The publisher places Across Borders in the  categories of Fiction/Thriller/Crime. The book is available at online retailers.

I would like to see the book available also at CBC and at christian book retailers as well.

Posted by GranthamLynn at 1:00 AM