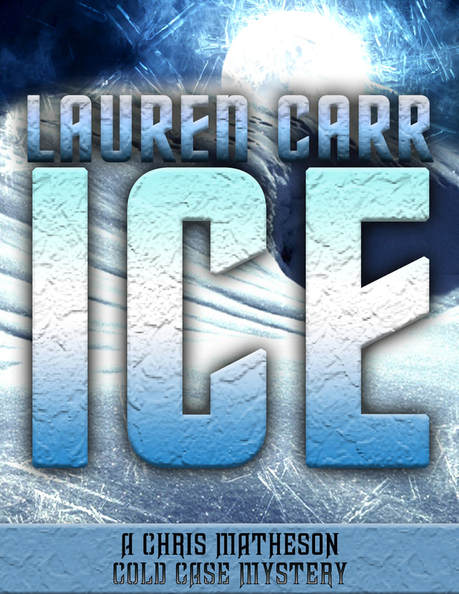 About the book
The clues for a close-to-the-heart missing person’s case heat up when Chris Matheson starts chipping away at the ice on the cold case.When Sandy Lipton and her unborn child disappear, the court of public opinion finds young Chris Matheson guilty. Decades later, the retired FBI agent returns home to discover that the cloud of suspicion cast over him and his family has never lifted. With the help of a team of fellow retired law enforcement officers, each a specialist in their own field of investigation, Chris Matheson starts chipping away at the ice on this cold case to uncover what had happened to Sandy and her baby and the clues are getting hot!

Interview with the author
Hello Lauren.  Welcome to the blog.  I am so excited to chat again!

And this time about an entirely new series.  It’s gonna be hard not
to talk about Mac and Gnarly but I just know you have lots to tell us about
Chris.

I know we’ve visited before but it’s been awhile lets settle in with a few just silly random questions!

When you get a chance to sit and read a new book what do you cuddle
up with? (glass of wine, can of soda, sweet tea)
A mocha latte.

One more random one.   Do you have a favorite sport?
I’m not a fan of watching any sport. As far as participating, I would have to say hiking. I love horseback riding, but I’m not allowed to do that anymore. More about that later.

I know you are a dog lover.  But I notice horses have a way of getting into
some of the stories.  Are you maybe a horse lover too?
I absolutely love horses. I grew up a farm girl. When I was a little girl, I had a pony. When I was in high school, I had an Arabian. Through the years, I took some horseback riding lessons, but timing never worked out to buy a horse, which I would have to board since we don’t have room at our home.

A few years ago, a friend invited me to ride one of her horses, which was a jumper. Being the daredevil I am, I encouraged the horse to take a jump. I made the jump, which I’m told was beautiful. But, when we turned around to go back, I fell off and suffered a concussion and ended up in the hospital. My husband has forbidden me to ride ever again. I can look. I can pet. But I’m not allowed to ride.

Before we get too far into Chris and the new book. How about
a couple background questions.

Has Chris and his story been rattling around in your brain long?
Last year, I saw a documentary about a group of former classmates investigating the cold case of their teacher, who had gone missing, only to be found murdered months later. I was inspired by these women, all in their fifties and sixties, combining their talents to solve this cold case. I was working on another book then, so I just tucked the idea into the back of my mind. Every now and then I would bring it to the forefront and massage it for a while. That’s what I do with every book. I start thinking about it months before I actually sit down to start writing it.

Did the idea of Chris’ character come before the idea of the series?
Chris Matheson came about the same time. I wanted to do a somewhat ensemble cast—the Geezer Squad. But, I needed an anchor character. I decided to make him an outsider. The reader meets and learns about the Geezer Squad at the same time Chris does. Chris is an outsider because he’s a young retiree. I myself have a few friends who either joined the military or went to work for the federal government right out of high school—making them eligible to retire in their early to mid-forties. Technically, Chris is able to join the Geezer Squad. But because of his youth, he’s an outsider who has a lot to learn.

Did maybe Gnarly try to make an appearance?
No, not really. This is Sterling’s book. Gnarly has a very special place in my heart, but Sterling has his own spot and I really wanted to give him his own series. Gnarly is standing by for the next Mac Faraday mystery which will be coming out later on this year!

Did you face any challenges as you began to write this series?
Since this is a new series with different characters, I focused on making sure that the characters were distinctive enough for readers to see that Chris Matheson and his family and friends lived in a world that was separate and different from the Mac Faraday mysteries.

Did you have to do any special research when you were writing
Ice?
Some. But I can’t really go into it without giving away any spoilers.

How did you choose the location?
For years friends have been encouraging me to place a series in the Harpers Ferry, West Virginia, area, which is where I live. I just needed the right inspiration. The eastern panhandle of West Virginia is close enough to Washington, DC, to be considered part of the metropolitan area—along with all its intrigue, but far enough away to have just the right amount of a rural homey atmosphere.

What genre category would you place Ice?
Primarily, I would place it in police procedural and cold case. I have become known for crossing genres with a mixture of mystery, suspense, thriller, a double helping of cold case, and a sprinkling of romance for good measure.

Bedroom scenes?  Language?  Violence?
One bedroom scene, but I close the door. Language is PG. A couple of hells or damns. That’s it. As for violence—it is a murder mystery. There is violence, but it is not graphic as in dismembered body parts and fluids.

How much alike or how different is this new series than the
other series that you write?
The Chris Matheson Cold Case Mysteries is similar in that it is a mystery series and will have my usual twists and turns. It will also have a healthy dose of humor as well.
The difference will stem from Chris Matheson being a totally different character. Mac Faraday is a rich powerful man. He’s in charge. His children are grown and he’s got the independence that comes from wealth and position.
Chris is a single father with three little girls. He lives with his mother, who is a strong, take charge type of woman. Notice, he’s surrounded by women, which he calls his “girls.” Due to his circumstance, he’s gentler—but he’s still a strong loving man.

I have to ask I hope it’s o.k.  chapter one seemed to ‘hit close to home’ maybe a bit of a dedication?
That’s okay to ask. I knew that anyone who has followed me and my books would notice that.
Ice opens with Chris Matheson scattering the ashes for his beloved German shepherd Winston, who had passed away of old age. Actually, it was not just a dedication to Gnarly, but to all of my beloved pets who I had lost throughout the years.
There was a real Winston. He was our first German shepherd who passed away at fourteen years of age. Sadie and Mocha, Doris’s entourage, are based on a Newfoundland (I made Sadie a Doberman) and a golden lab we had for many years.
Thor the rabbit is based on my sister’s German shepherd, who was Gnarly’s half-brother. He’s still alive and well and well over a hundred pounds. He’s a really big guy! I felt like I had too many German shepherds in my books, so I made Thor a female rabbit.

What is your favorite part of the tours?
Interviews with bloggers! I also love getting feedback from readers about my mysteries.

I love getting a chance to interview authors.  I think it’s my favorite part.

If you could choose any of the characters in the new series to have dinner
with who would you choose.  Where/What would you eat and drink.
Doris Matheson, Chris’s mother. She is such a strong woman, but people are attracted to her. There are strong people who repel those around them, and then there are those who are strong in an attractive way.

As a character, Doris just sprang to life. She’s had a very exciting background, which readers will learn in Ice. I discovered while proofing the book that she had a lot of my late mother’s personality in her.

Where would we eat? The Bavarian Inn in Shepherdstown, West Virginia. We’ll have chocolate mousse and champagne.

If you could choose any of the characters to bring over to the blog
for a visit and a chat/interview.  Who would you suggestion?
I would suggest Elliott Prescott. He’s had the most interesting life. The only problem is that after he answers your questions, he’ll have to kill you.

Insert smile.  This has been so fun.  I would love to have you back
anytime and I’d love for you to bring a friend.

Congratulations on the new book and Best Wishes for the tour.

And I thought
They just keep getting better and better.  I was excited to begin this new series with Lauren.  I didn't know what to expect.
A whole new series without Mac Faraday and Gnarly and all the others?
But Lauren never disappoints and she surely didn't with this new
fabulous series.
From turning page one all the way to turning the last page I was
involved and on the edge of my seat.
The characters as always are charming and funny.  The dialogue
keeps you laughing and giggling on almost every page.
From Sterling the 'goofy' retired police dog who turns on the truck radio to Country music much to Chris' chagrin.  This reader was cracking up.
The members of the 'Geezer Squad' are just as funny.  They are all a but quirky hiding their investigating from their families.
Upon meeting Chris he shares with them his guilt about the disappearance some 20 years earlier of a young woman he took to prom.  This cold case becomes the 'Geezers' priority and as everyone begins digging into files and records and doing research on their computers a possible serial killer begins to emerge.
Lauren Carr brings us a variety of characters that are charming, funny and like able.
And then an old girlfriend of Chris' is murdered and her house is set fire.  The serial killer is back or is he?

Chris his new/old girlfriend Helen and the Geezer squad keeps the heat on and discover the real criminal.

If your a fan of cozy mysteries you will love Ice!

I am looking forward to reading the next one in this new series!