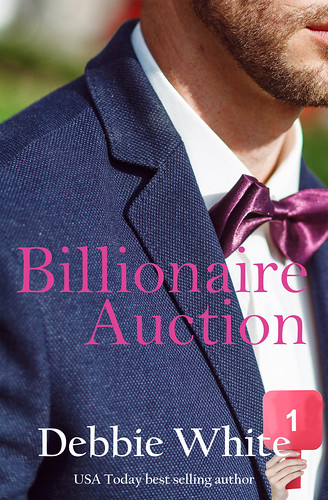 About the book
When a single independent woman falls for a single dad, she has to decide if she’s willing to accept the whole package.
Jennifer Palmer is not especially excited about attending the charity event, but because it helps homeless animals and because her best friend and roommate asked her to, she agrees to attend. Besides, it might be sort of fun bidding on an eligible billionaire and just what Jenny needs to move forward after the break up with her loser boyfriend, Brad.
Single dad, Chase Marlow is well-known in the community for his work with disadvantaged women and children. He also loves animals, so when he’s asked to be one of the auctioned billionaires, he steps up to the challenge.
Jenny isn’t planning on bidding, but when Chase enters the stage, all bets are off. After all, it’s just one date.
Can Jenny and Chase get that one date off the ground, or will there be too many obstacles in their way?

And I thought
This one was a fast sweet read.  Billonaire Auction is book 2
of the series.  It was an easy to read story.  The plot/story was great and I enjoyed Chase's story as a single father trying to raise his
daughter with the help of a housekeeper and nanny.
Jenny was a sweet young hardworking woman.  As a labor and
delivery nurse she spends many odd hours working leaving her
schedule for personal entertainment odd as well.
Trying to date with odd schedules is a challenge she finds out
when she meets and becomes interested in Chase after she
wins a date with him at a charity auction.
The story has some drama going on because Jenny just can't accept that Chase might really be interested in her.
Chase has his own drama and gets frustrated when Jenny goes
all wishey washey over and over.
The two finally straighten everything out and there is a happy ending.
For me this one was just an o.k.  I just couldn't get into either Chase
or Jenny because they just kept making the same mistake with each
other over and over.
If you a fan of a good sweet romance you might give this one a chance.
MaMa would probably love it too!

I received a complimentary copy.
My review will appear on Net Galley, Good Reads and retail sites.