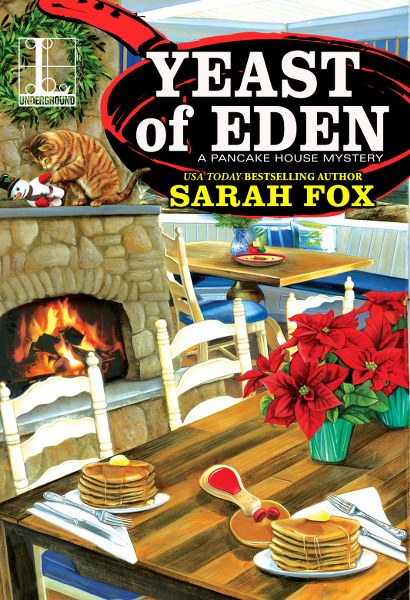 About the book
Winter has come to Wildwood Cove, and riding in on the chill is Wally Fowler. Although he’s been away for years, establishing his reputation as the self-proclaimed Waffle King, the wealthy blowhard has returned to the coastal community to make money, not friends—by pitting his hot and trendy Waffle Kingdom against Marley McKinney’s cozy pancake house, The Flip Side. Wally doesn’t see anything wrong in a little healthy competition, until he’s murdered in his own state-of-the art kitchen.
Marley isn’t surprised when the authorities sniff around The Flip Side for a motive, but it’s her best friend Lisa who gets grilled, given her sticky history with the victim. When a second murder rocks the town, it makes it harder than ever for Marley to clear Lisa’s name. Marley’s afraid that she’s next in line to die—and the way things are looking, the odds of surviving her investigatihon could be stacked against her.

And I thought
A good fast paced read.  There are no shortage of suspects or of sleuths.  This one was interesting with a goodly number of characters in the cast.  Which made it a little daunting for me keeping up with everyone.
It was fast paced in that the 1st murder happened just a few pages in.
Marley the main character discovers the 1st suspect that actually discovers the body but the bad thing is the 1st suspect is her own chef.  And then there's a good friend that just might have had something to do with the murder.  And the suspects begin to come out of the woodwork then.
There are some great recipes at the end and there is mention of some yummy eats throughout.
I enjoy this installment of the Pancake House Mystery series.
Sara Fox draws the reader in with a mystery that keeps the reader engrossed  and turning the pages.