Best Friends With A Royal Billionaire by Sophia Summers Spotlight/Review 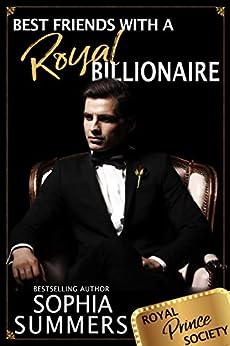 About the book
Being the Prince's best friend had its perks. Being his Gardener did not.
Prince Arlo just wants to date and marry Amara, but she pushes him away every time he tries. She knows what the press would say. She's already seen what his parents think about the match.
They agree to spend a month of the summer together at the annual prince's yacht party, anchored on a sand bar in the Mediterranean but everything becomes that much more complicated when a family of royals show up, with the daughter Arlo is expected to date. But everything comes to a stand still when the hurricane of the decade slams into Arlo and Amara's home country.
Will Arlo's parents finally see that Amara is the perfect queen for their country? Will Amara herself accept that fact?
Read this third book of friendship, loyalty and service as two best friends find their way into love.
Get to know more of the men in the royal prince society, the perks of the wealthy, their games as royals, and their adventures on the Mediterranean.

Buy the book
Amazon
And I thought
Another great read by Sophia Summers I have to say
this author continues to amaze me by providing clean sweet romances with new and different stories and plots.

Just when you think your gonna read a typical told again story your surprised again.

Just when I expected another woman or beau standing in the wings to wreck havoc...

Just when I thought the prince's family would disapprove...

I enjoyed this one.  The characters all of them were fun and dearing except for  a couple but of course you gotta have the guy that tries too hard for the girls attention.

Prince Arlo and Amara are just a great couple.  I enjoyed their childhood memories

I enjoyed the Princes and Amara's desire to help the poverty stricken people of their country.

If you love great characters and a good 'ole romance you'll want to get into this series.  Each  is a stand alone.  Jump in anywhere.