Scars of the Past by B.K. Stubblefield-Book Review 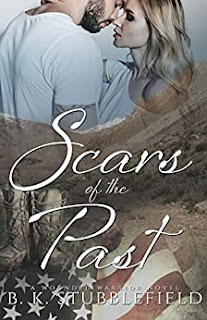 It’s been more than a year since an explosion cost soldier Reid McCabe a leg and two of his men. His physical wounds have healed. He’s not sure the emotional wounds ever will. Hopefully, the cross-country walk he’s participating in to raise awareness of veteran suicide and PTSD will help ease his troubled mind and spirit. The last thing he ever expected to be thinking about at this point in his recovery was love. But that was before he met the feisty Keira Flannigan …
Keira has emotional wounds of her own. Opening her heart to a wounded warrior—or anyone, for that matter—is not on her agenda.  She might need Reid’s help to foster and find a home for the little stray dog he’d rescued, but romance just isn’t in the cards for them. That’s what she tells herself, at least …
Can Reid and Keira overcome the years of pain and self-doubt that stand between them? Or will the scars of the past destroy their shot at happily ever after?

And I thought
What a great read.  I was not surprised because I have read the other books in the Oak Creek Series and I have really enjoyed each one.
Although Scars of the Past is part of the Oak Creek series it is written as a stand alone.
B.K. Stubblefield expertly weaves a story with likeable characters that keep you turning the pages.
You'll meet fun loving  Reid and Keira they will warm your heart.
They are just nice folks that  deserve romance even though they both are struggling with their pasts they become good friends that have a little bit of an attraction to each other.
This is not just a romance.  It is a story that takes you into real life that might be just a little too close to home in it's dealing with wounded warriors and how the after effects of war can ruin peoples lives.
In Scars of the Past we meet some wounded warriors that step up and help out veterans like themselves that are dealing with the scars.
There is some drama as the parents who have lost a son are hurting and blame others.
In the end we have a Happy Romance and a feel good story.

I received a complimentary copy.
My review will appear on retail sites and Good Reads and shared on social media.

Posted by GranthamLynn at 12:30 PM