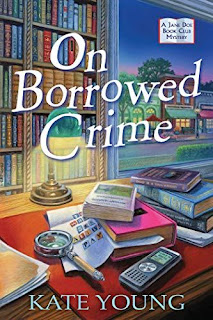 Young’s new Georgia-set, sweet tea filled, Jane Doe Book Club mysteries.
The Jane Doe book club enjoys guessing whodunit, but when murder happens in their midst, they discover solving crimes isn’t fun and games…
Lyla Moody loves her sleepy little town of Sweet Mountain, Georgia. She likes her job as receptionist for her uncle’s private investigative firm, her fellow true crime obsessed Jane Doe members are the friends she’s always wanted, and her parents just celebrated their fiftieth wedding anniversary. But recently, with her best friend Melanie on vacation, and her ex-boyfriend and horrible cousin becoming an item and moving in next door to her, her idyllic life is on the fritz. The cherry on top of it all is finding Carol, a member of the club, dead and shoved into a suitcase, left at Lyla’s front door.
Unusual circumstances notwithstanding, with Carol’s heart condition, the coroner rules Carol’s death undetermined. But when they discover the suitcase belongs to Melanie, who had returned from her vacation the following morning, Sweet Mountain police begin to suspect Lyla’s best friend. Determined that police are following the wrong trail, to clear her friend’s name, and to not allow Carol become one of the club’s studied cold cases, Lyla begins to seek out the real killer. That is, until she becomes the one sought after. Now, finding the truth could turn her into the killer’s next plot twist, unless she wins the game of cat and mouse

And I thought
I just really, really liked this one!  It had me speeding through my day till I could sit down and turn the pages!

I think alot of what I liked was the Southern Charm.  I loved
Lyla and her friends and family.  Even though MaMa was a bit alot (!) over the top. I  liked her Grandma she was a 'stinker' and helped Lyla with investigating because she snoops.  Grandma made me giggle.
To me this one was a little more Crime/Murder Mystery thme only because the plot was based around an old unsolved murder cases.
Even though the Cold Case is the impetus which seemed to have caused Carol's demise On Borrowed Crime is indeed a really, really good Cozy.
There are a lot of characters besides Lyla and her family including all the book club members and local law and the Cold Case Investigator seems to be on his way to important character in the series.  Giving nothing away here you'll have to read this one it is a great read and I am anxiously awaiting for the next one.
I received a complimentary copy.  My review will appear
on retail sites and Good Reads.
On Borrowed Crime and the Great Escapes Tour will be promoted on Social Media.