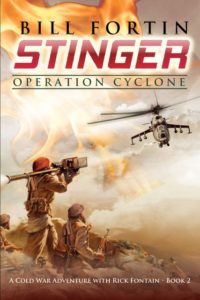 About the book
Rick Fontain is back… This Cold War adventure takes the reader inside the classified exploits of Senator Charlie Wilson and CIA’s Task Force Chief, Gust Avrakotos. Strange bedfellows they were… their alliance proved to be one of the most successful partnerships in the history of the CIA. Stinger: Operation Cyclone recounts the outcomes of their efforts.
The adventure begins with the election of Ronald Regan in 1979. This was the same year that the Soviet Union invaded Afghanistan. Early in 1982 POTUS called for a plan of action to arm and finance the Jihadi warriors known as the Mujahideen. Operation Cyclone was the code name assigned to this project.
Rick is re-united with his Redeye instructor, Andy Davis, and together they would design a plan to kill buku Russian aircraft. The operation stalls until Rick thwarts an assignation attempt on one, Maalouf Torki bin Taisei. Mr. Taisei is a Malaysian government official. He is also the largest arms dealer on the Pacific Rim.
The Russian KGB suspects that President of Pakistan, Zia, and his ISI have aligned themselves with the American’s. Their attacks are fierce, but, the result was not what they expected. President Regan issued a change to the original operation requirements. The gloves were to come off. Rick Fontain is told to do whatever it takes to get Stinger into the hands of the Afghan Freedom Fighters.
American Special Forces, the Green Beret and DELTA, are sent to the ISI’s Ojhri Camp located just outside of Islamabad. CIA operatives LTC Jim Pezlola and CWO Gary Larson, solicit the Mujahideen Command to provide students for the  very first class of Stinger shooters.
Rick takes the graduating class into Afghanistan to the Russian airbase at Bagram. The rest… as they say… is history. Operation Cyclone may not have ended the Cold War, but it certainly had weakened the Soviet Union’s resolve. So much so… that in 1993 it financially collapsed.
And others are saying

“This story has it all, war, politics, history and more. Enjoyable and thought provoking. I stumbled upon Bill’s first book Redeye Fulda Cold and really liked it so I decided to try his follow-up. Great read! Can’t wait to read the next one. I can easily see it being adapted for the big screen. From the opening scene in the elevator to the scene high on the narrow path to the helicopter attacks, crashes and the sad death of Rick’s friend and fellow Stinger expert Andy Davis, this book has it all. Terrific international locations and cast of characters and compelling story of providing and attempting to control the transfer of weapons and expertise needed for their use to be successful. You feel immersed in the detailed descriptions of locations in Afghanistan, Kula Lumpur, London, etc. Bill’s greatest strength as an author may be his ability to make you question how much of this is fact and how much is fiction.:”-billq, Amazon Review

“With a smooth, wry touch, Bill Fortin spins a page-turning Cold War tale capturing both the great bravery and the occasional comic moments — some intentional, some classic SNAFUs — of U.S. military intelligence saving the world from Russia invasion.”- W.E.B. Griffin & William E. Butterworth IV, #1 New York Times and Wall Street Journal Bestselling Authors
Rick Fontain tells us about his exciting adventures through a first person narrative.  As a reader, I felt that I could connect easily with Rick on his incredible journey as he takes you by the hand and doesn’t let it go until the last page. Fortin does a remarkable job of describing the people and the landscape of the late 1960s, while throwing more light onto the tactics that the American military deployed to contain Russia in the Cold War. I certainly hope that this isn’t the last we have heard from Rick Fontain, and do hope that there is a sequel in the near future, as I cannot wait to read more of this young hero’s adventures and more of his infectious good humor. Fortin has put together a remarkably well written story with a vast amount of meticulous research.”- C.R.Putsche, Amazon Review
“a fascinating, eye-opening story of the American military move to contain Russia during the Cold War in the late 1960s, when most American eyes were focused on Vietnam. Told in short scenes, making the plot really easy to follow. There is a lot of detail—I was surprised, for example, to read about the use of drones in 1969—but always the story spins out in real-life scenes. It is clearly an army account, but the emphasis stays on “story.” Descriptions, of churches, towns, airplanes—all the scenes of the book—are so good we can “see” the places. Dialogue is snappy and real. I felt I got to know Rick Fontain, and look forward to meeting him in future historical novels. He has a freshness of view that makes the very tough Cold War story understandable. Extensive footnotes show the thorough research behind this book, and above all, it is so well written that I was always surprised to see how many pages had gone by. Read this to be entertained, but also to discover a successful and little-known war-front deployment that Americans are grateful for.”-Kay In Seattle, Amazon Review
“Bill Fortin’s, Redeye Fulda Cold, is a historically accurate, yet humorous account of one soldier’s mission during the Cold War.
Although written as fiction, the novel is an exercise in authenticity, with stretches illuminating the technical expertise required for a unit to accommodate seemingly never-ending revisions to Cold War objectives. Fortin cloaks the technical military facts and technology in character moments, using them to highlight Fontain’s sarcasm and tongue-in-cheek humor. Can’t wait to read the next Rick Fontain novel!”-Lisa Wieman Meerdter, Amazon Review
Buy the book
AmazonBarnesandNobleIndieBoundBookDepository
And I thought
A guys book.  Written by guy.  But sometimes girls like 'em too.
Stinger Operation Cyclone was a page turner from page 1.
I was swept in and ended up on a fast paced ride to the end.
Bill Fontin knows how to weave a story with the details, descriptions of people and places to intrigue the reader and keep you engaged.  Fontin writes expertly about the Middle East and military topics in a way that your drawn in and unable to put the book down.
I enjoyed Stinger Operation Cyclone much more than I expected to.
A cast of characters from each location of the story is provided at the end that helps keep the reader involved in this fast paced story.
I look forward to reading more in the series.

To read more reviews,watch the trailer and enter the Giveaway Click here