And I think
Addison Cole continues to provide lovers of romance some great sweet stories.  There is a little sizzle in her stories and my MaMa
would think it's a little too hot.  But my Jazzy Grandma would be
fanning herself and turning the pages.
Each book in this and her other series are written as stand alones
it is easy to step in and pick up the stories.
The characters are well developed and a flawless written story makes each one a page turner.

I have enjoyed each of the stories that I've read.

I received complimentary copies.
My review(s) will appear on retail sites and Good Reads. 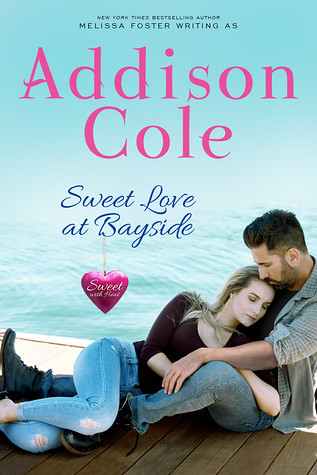 About the book
Fall in love at Bayside, where sandy beaches, good friends, and true love come together in the sweet small towns of Cape Cod. Bayside Summers is a series of standalone romance novels featuring fiercely loyal heroes and sassy, empowered women. They're fun, flirty, flawed, and easy to relate to.
In Sweet Love at Bayside…As the co-owner of Bayside Resorts, Rick Savage has a fabulous job working with his best friends and brother, and a thriving business in Washington, DC, which he'll be returning to at the end of the summer. Spending time with his family is great, but being back on Cape Cod has unearthed painful memories. When sweet, smart, and overly cautious Desiree Cleary moves in next door, Rick is drawn to the sexy preschool teacher, and she just might prove to be the perfect distraction.
Running an art gallery was not in preschool teacher Desiree Cleary's plans, but after being tricked into coming to her impetuous, unreliable mother's aid, she's stuck spending the summer with the rebellious half sister she barely knows and a misbehaving dog. If that's not frustrating enough, she can't escape the sparks igniting with her strikingly handsome and pushy neighbor, Rick, who makes all her warning bells go off.
Passion ignites as Desiree and Rick spend long summer nights sharing heartfelt confessions and steamy kisses. For the first time in years Rick is enjoying life again instead of hiding behind mounds of work miles away from his family. Desiree has touched him in a way that makes him want to slow down. Only slowing down means dealing with his demons, and he isn't sure who he'll be when he comes out the other side.

About the series
About SWEET WITH HEAT novels...
Sweet with Heat books are the sweet editions of the Love in Bloom steamy romance novels by New York Times bestselling author Melissa Foster. Sweet with Heat books convey all of the passion you expect between two people in love, without any explicit scenes or harsh language. 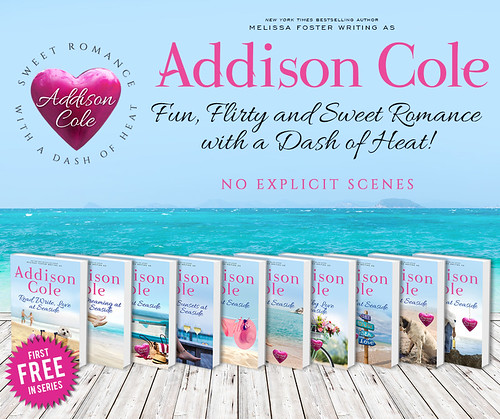 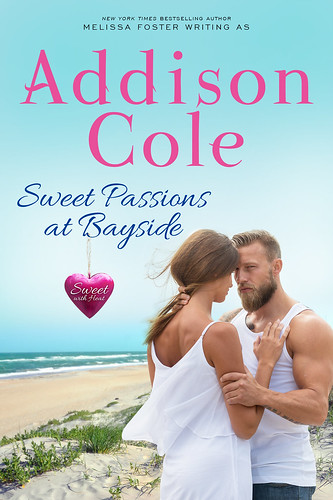 About the book
Fall in love at Bayside, where sandy beaches, good friends, and true love come together in the sweet small towns of Cape Cod. Bayside Summers is a series of standalone romance novels featuring fiercely loyal heroes and sassy, empowered women. They're fun, flirty, flawed, and easy to relate to.In Sweet Passions at Bayside… When Emery Andrews's best friend, Desiree, moves away, falls in love, and opens an inn all in one summer, she feels her absence like a missing limb. Until she visits over the holidays and meets sinfully hot Dean Masters, who's as easy on the eyes as he is to talk to. After returning home, what starts as a flurry of late-night flirtations quickly turns into a deep connection and unexpected friendship. Now, months later, Desiree offers Emery a job teaching yoga at the inn. Adventurous Emery jumps at the chance and heads for Wellfleet, Massachusetts, to reunite with her BFF and her new close friend, Dean.After months of sharing their lives, and their secrets, over video chats and phone calls, Dean's ready to move things to the next level. The fact that Emery seems oblivious to the sparks between them and has recently put her foot down about dating friends just means he'll have to bide his time.When Emery finds a man in her kitchen the first morning she's there, Dean doesn't hesitate to move her into his guest room. Maybe now Emery will see what's right before her eyes-although that guy she's got a date with might be a problem.