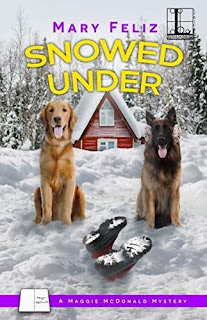 When professional organizer Maggie McDonald finds a body in a snowdrift outside her friend’s ski cabin, she must plow through the clues to find a cold-blooded killer . .


Lake Tahoe in February is beautiful, but Maggie can't see a thing as she drives through a blinding blizzard with her friend Tess Olmos and their dogs, golden retriever Belle and German shepherd Mozart.Maggie has offered her professional decluttering skills to help Tess tidy up her late husband's cabin in preparation to sell. She also plans to get in some skiing when her husband Max and their boys join them later in the week.

What she doesn't plan on is finding a boot in a snowdrift attached to a corpse. The frozen stiff turns out to be Tess's neighbor, Dev Bailey, who disappeared two months ago. His widow Leslie expresses grief, but Maggie can't help but wonder if it's a snow job. As more suspects start to pile up, things go downhill fast, and Maggie must keep her cool to solve the murder before the killer takes a powder . . .

And I thought
I love the cover!  Belle and Mozart are great doggie characters perfect for a Cozy series.
Author Mary Feliz brings us book 6 in a fun and Cozy series.
And it is a good thing there is some Coziness because this one might chill you to the bone!
When Maggie and Tess realize that murder was a foot they soon begin finding suspects which take them on a chilly ride.
Snowed under is a great read filled with interesting characters  and a great  plot that will keep you turning the pagesI received a complimentary coffee my review will appear on retail sites and Goodreads

Posted by GranthamLynn at 10:15 AM