Dog Days of Christmas feat. Stamped Out by Tonya Kappes 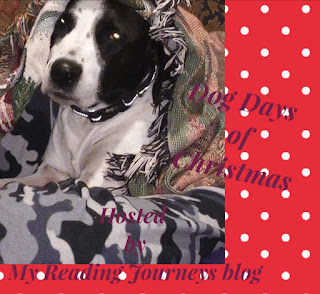 I am featuring this new release because I really want to read it.  I asked Lola she said it was o.k. 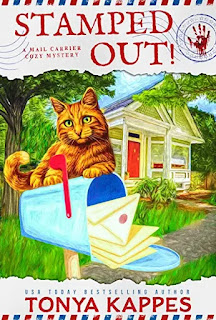 About the book
Discover the southern life of Bernadette Butler, along with the eccentric and lovable citizens, along with all the fur babies, who live in Sugar Creek Gap in this NEW southern cozy mystery series by USA TODAY Bestselling Author Tonya Kappes. Don't miss out on the good RECIPES at the end of the book!
Everyone in Sugar Creek Gap has tried to fix up widow and beloved mail carrier, Bernadette Davis on several dates. They say she has to be lonely.
What they don't know is how Bernadette's life is filled...filled with everyone's hidden secrets and obsessions. After all, she does deliver their mail and hears all the dirty laundry southern folks love to sweep secrets under the rug.
While on her route, Bernadette finds out the beloved Sugar Creek Gap Country Club is being sold and turned into condos. The developer is Bernadette's best friend, Mac Tabor and right now he's not very popular.
The entire town is against the development and eager to vote it down, vowing they will do whatever needs to be done to stop the sell of the country club to Mac Tabor.
Chuck Shilling, majority owner of the country club, and Mac have a public fight because Chuck is rethinking of selling the club to Mac. When Chuck is found dead, Mac Tabor is the number one suspect.
Bernadette discovers she's got a penchant for discovering clues that just might help STAMP OUT a killer who is on the loose while trying to save Mac Tabor from going to prison for a murder he didn't commit.
Meet the author
Website click Here
Facebook click
Amazon click Here
Good Reads click
Buy the book
Amazon
Click Here
Posted by GranthamLynn at 8:44 AM