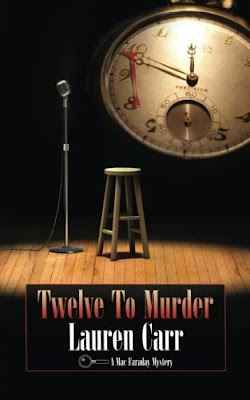 Two people are brutally murdered in their summer place on Deep Creek Lake. Suspected of the murders, former child star and one-time teenybopper idol Lenny Frost takes innocent bystanders hostage in a local pub and demands that Mac Faraday find the killer. Can Mac save the hostages and himself from the wrath of the enraged has-been by piecing together the clues in less than twelve hours, or will it be a fatal last call at the stroke of midnight?

Anyone who is near the newscan't help but hear about the fall of one child star or teenybopper idol afteranother. Miley Cyrus twerking everywhere. (I actually had to google to find out what that is.) Lindsay Lohan going in and out ofrehab like it had a revolving door. Has-beens arrested and committing suicideor dying of overdoses. In the eighties, Corey Haim was a very successful childstar, became a teen-idol, and ended up dead before he was forty.

These stories caused me to ask "What if..."

The answer to that question inspired Twelve to Murder.

What if a very intelligent boy reached his peak before even reaching legal drinking age? What are the emotional effects to an extremely intelligent young man when he realizes he'll never reach the same level of success that hehad when he was a teenager? How does it feel to be a has-been? What would such a person do when suddenly, he is featured on the news again, only this time, itis because he has been accused of a double homicide?

In my latest MacFaraday Mystery, such is the case of former child-star and teen-idol LennyFrost when he steps into a pub in Deep Creek Lake to see his face on the television over the bar with the announcement that once again, he's wanted...for the murder of his agent and her husband!

How does Lenny Frost react to this sudden celebrity? He takes everyone hostage and gives Mac Faraday twelve hours to find the murderer or he's going to kill everyone in the bar.

"Carr is a very gifted novelist. Hermystery novels, both the Mac Faraday and Lovers in Crime Series, arephenomenal. Her ability to keep the reader guessing, as well as her plotlinesthat flow so effortlessly as they work up to the big reveal, always make hernovels a fun endeavor, and I look forward to even more of her work as this yearunfolds. " Shana Benedict, ABookVacation

"Lauren Carr could give Agatha Christie arun for her money! This hypnotic page-turner is a whirlwind of romance, murder,and espionage. Lots of creativity went into the unforeseen twists, andculminated in a climactic ending that tied the multi-faceted story into a nicelittle package." Charlene Mabie-Gamble, Literary R&R

As always a Lauren Carr book is a page turning sensation!

The Mac Faraday Mysteries are filled with fun and quirky characters.    And quirky scenes too.  Like when the hostages begin to act like they are on Survival and begin voting people Out!

I have read several Mac Faraday books not in any kind of order.  I just grab them anytime I get a chance.

Twelve To Murder is book 7 in the series.   Book 12 Candidate for Murder was the first book in the series that I read.

I liked it so much I wanted to read more.

All the books are written as stand alones giving a new reader the chance start anywhere in the series and be able to catch on to what is going on.

A cast of characters is provided at the beginning of  each book.

It is best to start at the beginning but don't let that stop you from becoming a Mac Faraday and Lauren Carr fan.

I am enjoying going back and reading the ones I have missed.  I expect someday once my library is complete I will start over with book 1.

There is a lot of detective work that goes into the crime solving in each book making them what is called a Police Procedural.

But they are also like Cozy Mysteries because there a pets involved in each book.  The crimes are not describe in a way that makes the reading grisly The bedroom doors is closed.   Mostly dogs.  And in Cozys no animals are harmed.

Even though Mac is accused by his lady love when he doesn't realize Gnarly has eaten a few things he shouldn't.

Poor Mac was trying to be a good hostage negotiator at the time.

But as with all good books in my opinion the bad guys and gals are caught.  The mystery is solved.  And there's a Happy Ending.

My review will appear on  retail sites and Good Reads.

Twelve To Murder is part of the tour for the newest Mac Faraday release.   To read more reviews click Here