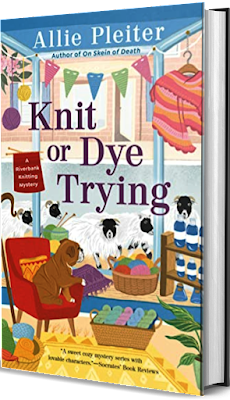 Business is booming for Libby Beckett and her fabulous Maryland shop, aptly named Y.A.R.N., but when a town festival brings a fatality with it, Libby gets all tangled up in murder.

As spring comes to Collinstown, the village launches a food festival to draw a new group of tourists. Libby, the proud owner of Y.A.R.N., has planned a yarn event to provide an alternative option to a foodie weekend. Artisan fiber dyer Julie Wilson—known for her work with animal-friendly, plant-based knitting fibers such as bamboo and hemp as well as her brilliant use of color—will hopefully draw a crowd with a special dyeing workshop.

The festival begins, but it draws more than crowds. First, a flock of sheep parades down the street, herded by farmers protesting Julie’s antiwool stance. Then Julie’s celebrity chef sister appears, and the siblings resume a long-standing rivalry. Despite all this, Julie’s workshop has sold out. Libby is thrilled, and they’re preparing for a full house. But the night before the event, Julie is found alone in the warehouse event space—dead. The witty “Watch Julie Wilson Dye” workshop title now has a terrible new meaning—and it’s up to Libby to catch a crafty killer.

And others are saying

You’re just going to have to read, KNIT or DYE TRYING for yourself!~Lisa Ks Book Reviews

Knit of Dye Trying was an adorable cozy mystery with a lovely cast of characters. I loved being a part of the food festival and learning more about Libby’s wonderful yarn shop.~Moonlight Rendezvous

This is my first read by Pleiter, but it will not be my last. The pace was steady and there were numerous suspects. What I liked most was Libby’s attitude and the relationship between Libby and Gavin, as well as with the others who came into YARN.~Christa Reads and Writes

I love a cover that draws me in and asks me to turn the pages.

I love covers that hold clues.

But it does depicts perfectly Libby’s  Yarn Shop  called Y.A.R.N.  There's  alot going on at Y.A.R.N and around the little Maryland Town of Collinstown.

The little  Yarn Shop and town is filled with curious characters.  Those who visit are greeted by Hank Libby’s English Bull Dog. Not only does he model sweaters Libby has crafted he entertains the customers when he's not helping Libby sniff  our clues.

There is quite  an assortment  of characters that mingle in the shop and Libby’s  little world built around Y.A.R.N.

I enjoyed my visit and the twisty turning ride solving the clues.

I can easily say that this series gets better with each book!

I received a complimentary  copy.

My review will appear on Amazon  and Good Reads.

There is a Giveaway

Posted by GranthamLynn at 2:10 PM