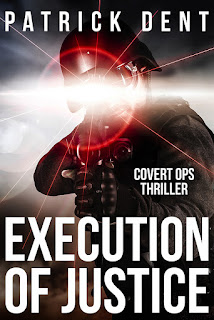 About the book
When three Covert Operatives are brutally murdered while investigating a human trafficker who has taken a congressman’s daughter, John Drake is called in. Driven by personal demons, he is determined to deliver his own brand of justice to this ruthless gang.
As Drake tracks the most powerful enemy he has ever faced, an already tough mission becomes nearly impossible when Drake’s assignment propels him to the fulcrum of a new World War, and a CIA plot to incite conflict between the Muslim oil countries and Israel unfolds.
Haunted by trauma from his past, Drake must ultimately confront the most terrifying identity of all – his own. Can he hunt down the most dangerous man in the world and prevent a war? Or will he become the monster he hunts?
And I thought
I am a fan of thrillers.  I am a fan of an action packed military thriller.  Execution of Justice was a 5 star read.  If I had a print copy I would have this one in an evening.  It kept me that engaged.
With that said  . . .
In the beginning it was a little difficult to keep up with the plot.
The story jumps from the Middle East as each of the operatives are caught and assassinated.

The story jumps to John Drake as his background before ending up in the army.  Which in itself is really interesting and kept me engaged.

Once Drakes goes to basic he is immediately noticed by his superiors.   His dad ends up pulling strings and getting John
assigned to the Covert Operation to extract the kidnapped girl.

John is his partner Gip who went through basic together are sent on a mission with financial support and not much else.  If the complete the mission the hero's.  If they don't likely become the 4th and 5th fatality.

Although John has some personal background that could affect his military career these same personal conflicts are what make him the soldier that he is and allows him to step up to the plate and get the job down.

I enjoyed the ending as much as the rest of the story.

I would like to see more of John Drake and his partner Gip.

Read An Excerpt
Outside, Drake had moved to the north side. Men occupied all eight windows, their AK-47s at the ready. By his count, there were over twenty men remaining inside the citadel. It was time for the claymores.

When Drake hit the button, the result was devastating. All the men in the windows on the north side were shredded as thousands of steel balls passed effortlessly through the heavy wooden shutters, then through the soft tissue and bones of their bodies. After the smoke and dust had settled, Drake shouldered his weapon and sprinted toward the aqueduct grating.

Gip was back at his original position, flanking the south entrance. He continued to move to and fro, rattling off automatic fire to create the illusion that he was an entire squad. Abruptly, the earth shook with a massive explosion from the north side. He was caught by surprise. His ears rang terribly. He ceased fire and low crawled his way toward the claymore switch.

Tartus' men were bustling with panic on the south side. After the enormous explosion from the north side, the firing from the rocks had stopped.The northern entrance had obviously been compromised. After much shouting, the men outside stopped their wild firing, eventually realizing they were shooting at no targets.

Gip peeked out and saw heads or silhouettes occupying all the southern windows, rifle barrels waving back and forth across the rock formations. Although he couldn't see them, he guessed there were at least six more men hiding outside among the rocks.

Bracing himself against the sound, he fired the claymores. Again, concussion rocked the night. Body parts were strewn about the compound, falling to the ground with a sickening, wet sound. A preternatural silence followed the explosion. No gunshots, no birds, no insects, no voices; merely the ringing in his ears. Everything outside the citadel was dead.

Gip estimated about a dozen bodies in the south compound. He didn't know how many Drake had gotten on the north side, but with luck he had gotten at least the men in the windows. That left the four snipers on the roof, plus between two and five inside, plus Tartus.

Gip checked his watch. Drake would be in the aqueduct soon. It was time for phase two.