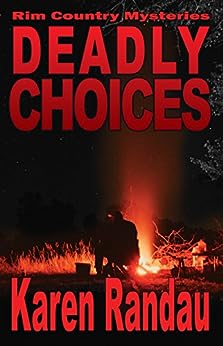 About the book
An elderly woman with an arrow in her chest. A murdered journalist. A decades-old cover-up. In Deadly Choices (Rim Country Mysteries Volume 3), Rita and Cliff Avery team up again to solve a spate of murders in their picturesque Arizona mountain town of Rim Vista. Rita’s mother Willow delivers gut-wrenching news while falling for the man who could be responsible for four deaths. And Rita must escape a string of life-threatening predicaments thrown at her by an assailant willing to do anything to scare Cliff off the case.
And I thought
Not just a page turner! It will grab you at page one. You'll behanging on for dear life!Deadly Choices is a smoothly written thriller that will have you on the edge of your seat trying to figure out who the villain is.There are a lot of options to choose from! Among the suspects is the antique shop employee, the German antique buyer and his daughter, the victim's girlfriend (who turns out to be leading a double life ) and even Rita's rancher friend Robert.As Rita and her detective husband search for clues Rita's momWillow joins in to clear Robert's good name after they become smitten with each other.There is a bit of a rocky road for Rita as she investigates from being kidnapped to narrowly escaping being blown to smithereens by a bomb that takes out one of the suspects.Deadly Choices is book 3 in the series. It is written as a stand alone installment.I enjoyed the dynamics between Rita and her husband Cliff so much that I would really like to read the first two books. (see info below on the series) I expect Willow and Robert I will be a permanent part of the cast in future installments.If your a fan of suspense you'll enjoy this thrilling twisty story.You'll be kept guessing!This was a great story/plot for any age with no language, graphic romantic or crime scenes.

This review will appear on retail sites and Good Reads.