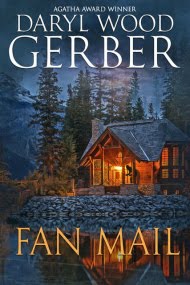 About the book
An adoring fan and a string of murders: a demented show of love that leaves no one safe...

Local celebrity news anchor Gloria Morning is used to receiving declarations of love and praise in her weekly fan letters, but when a Lake Tahoe doctor is murdered and she gets an anonymous note telling her it was done for her glory, her appreciation turns to panic. Unsure of where else to turn, she enlists the help of novice private investigator Aspen Adams. No sooner does Aspen begin digging into who sent the macabre note than another murder occurs, followed by another note, and she soon realizes she’s up against a methodical and deranged killer.

Working with scant clues and a puzzling array of potential suspects, Aspen is determined to unearth the elusive connection between the victims and her client. But as the body count grows and the murderer remains a mystery to both her and the police, Aspen discovers she’s gotten closer to the killer than she ever imagined, and now she must risk everything she holds dear to stop the killings, including her own life.
Buy the book
Amazon
B&N
Apple Books
Google Play
Smashwords
KOBO

Posted by GranthamLynn at 12:30 AM