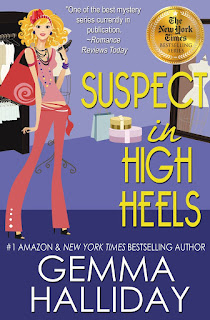 When Maddie Springer—shoe designer turned amateur sleuth—tags along with her mother to the Antiques Extravaganza road show, the last thing she expects to have to do is pull her mom off of a celebrity appraiser after he calls her prized antique hatpin a phony. But things go from harried to homicide when the same appraiser is found dead just moments later—killed by Mom’s hatpin!
Now not even Maddie’s husband, LAPD Detective Jack Ramirez, can save Mom as the force’s two most bumbling detectives are assigned to the case. As if Maddie doesn’t have enough on her plate, her best friends, Dana and Marco, enlist her help to plan the most over-the-top Hollywood surprise party ever for Dana’s fiancé (who has a little surprise of his own up his sleeve), Maddie’s adorable twin toddlers are always up to no good, and the only thing that can calm her fashion-challenged and suddenly-a-suspect mom down are aura cleansing from her favorite Venice Beach psychic, Mrs. Rosenblatt. Whether they help or hurt, Maddie’s friends assist her in wading through a slew of murder suspects—none of whom are telling the truth and all of whom have ample motive to want the appraiser dead. Was it the frigid business partner with questionable ethics? The clown-collecting fan-turned-stalker? The auction house owner with a grudge? Or was the appraiser’s real business something much more sinister than his TV personality let on…and much more deadly?

Maddie and her eccentric gang of unlikely sleuths are under the gun to find out before the real killer strikes again…and Mom takes the fall!
And I thought
Too good to put down! Good thing I picked this one up on a long weeekend!

I cannot believe that I have not discovered this series before now.

For me and I hope for author Gemma Holiday that is what makes book tours and promo's important.  I am so glad this book is touring with Great Escapes. Honestly I am not sure I would have found it otherwise and I am glad did.

Except that Suspect In High Heels is book 10 in the series and now I want to read all the rest!

If your like me and just discovering Maddie Springer  you will have no trouble getting into the with characters.
Which to me speaks of a well crafted plot and great characters that are well developed.

Suspect In High Heels was fun and funny and kept me turning the pages.  From Maddie's mom Betty that ends up being the suspect (BTW way in her 80's fashion she would not be caught dead in culottes) to her friend Mrs. Rosenblatt that yells at stumble bum police detectives and calls them out for arresting Betty.
Maddies best friend between jobs actress (not unemployed)  Dana is 'Johnny on the spot' to help ferret out clues and has some experience since since she once played a police detective that was studying to be a lawyer.  And thankfully she was there to keep the stumble bum detectives in line when they searched Betty's car.
As Maddie and Dana investigate and chat it up with suspects behind the scenes Dana is planning a end all birthday party for her fiance.
And in the end the murder is discovered and the Birthday ends up being the event of the season.

I absolutely adored (if it is possible to adore a mystery) this book and the characters.

My TBR pile just got bigger by 9.

I received a complimentary copy.
My review will appear on retail sites, Good Reads and promoted on social media.


The rest of the series