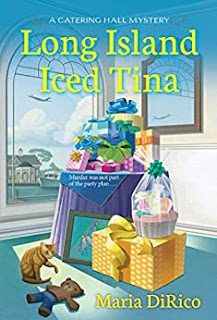 Nicole pursed her lips. “Oh, don’t think she’s doing it for me. Tina’s convinced that my dad still has feelings for my mom. She’s throwing the shower to show off and compete with her. It’s infuriating but I can’t say no because my parents just want peace in the family.”

“Where’s she having it?”

“Versailles on the Park.”

Nicole gave a vigorous nod. “I know. Like I said, showing off. Bella figura.”

Mia nodded, all too familiar with bella figura, the Italian concept of presenting a positive, even superior, social image to the world. She picked up one of Piero’s homemade breadsticks and snapped it in half. “Wow. Okay, so you can’t get out of that shower. But I’m worried the rest of the lineup is gonna wear you out. I think you should combine everything else except the work event into one shower. If you’re on board with this, I’ll sell it to your mother and grandmother. It’ll up their guest list, but I’m sure they won’t care.”

Nicole straightened up. “I would love that. Thank you.”

“It’s done.” Mia looked around the restaurant. A couple of older men she recognized as Donny Boldano’s “associates” waved to her and she waved back. “Piero never brought us menus.”

“He told me we didn’t need them. He had a special order for us.’

“Whatevs. He’s an amazing cook.” Mia chomped down on half of her breadstick. She followed this up by eating the other half.

Nicole leaned forward. “So, what’s going on with you? Deets about your love life, please. You and Jamie . . .”

Nicole wiggled her eyebrows and flashed a knowing smile. Mia shook her head and held up a hand. “Not happening. Just friends. He’s got a girlfriend. And I’m not dating. No time. Belle View is taking off, which is great, but we’re understaffed. Everyone’s working really hard, even our one slacker employee, Cammie Dianopolis. But slacking was basically written into her deal, so she’s doing us a favor just by showing up. We have to hire more people, but I’m not sure where to look.” She frowned and drained her wine glass. “To be honest, I did an online search for ‘how to run a catering hall.’ I dug up

some good stuff, but not enough. I wish I could crash a party at another venue to see how they run things.”

“You don’t have to crash anything,” Nicole said. “Consider yourself invited to Tina’s big fat Greek baby shower.”

Mia brightened. “Really? That would be wonderful. I can learn a lot from a Versailles event.”

Piero emerged from the kitchen holding two large plates emitting clouds of steam. He deposited one in front of each woman. “Ecco,” he said. “Here you go.”

Mia sniffed the steam. “Capers. Tomatoes. Olives. This is—”

“Pasta puttanesca,” Piero said with pride. “By special request.” He mimed tipping a hat and returned to the bar.

“Special request,” Mia repeated. She wrinkled her brow. “Nicole, did you tell your grandmother where we were eating?”

“Yes.” Nicole stared her plate. “She must have heard about Tina’s shower.”

“Oh, yeah.” Mia looped pasta around her fork, then deposited it in her mouth. “I have to say, this is the most delicious stepmother-shaming pasta you will ever eat.”

Mia Carina is back in the borough of Queens—in charge of the family catering hall, Belle View Banquet Manor, and keeping her nonna company. But some events—like murder—are not the kind you can schedule . . .

Mia’s newly pregnant friend Nicole plans to hold a shower at Belle View—but Nicole also has to attend one that her competitive (and mysteriously rich) stepmother, Tina, is throwing at the fanciest place in Queens. It’s a good chance for Mia to snoop on a competitor, especially since doing a search for “how to run a catering hall” can get you only so far.

Mia tags along at the lavish party, but the ambience suffers at Nicole’s Belle View shower when a fight breaks out—and then, oddly, a long-missing and valuable stolen painting is unwrapped by the mom-to-be. Tina is clearly shocked to see it. But not as shocked as Mia is when, soon afterward, she spots the lifeless body of a party guest floating in the marina . . .

And others are saying ...

Ms. DiRico has an amazing imagination, and it shows throughout this book which transports the reader into the story so perfectly.

LONG ISLAND ICED TINA is a thoroughly enjoyable laugh out loud mystery that kept me engaged from start to finish.

~Cozy Up With Kathy

Maria DiRico writes with such flair and an easy style. There were a plethora of suspects to choose from who might have had the motive to kill and I enjoyed the way in which Mia evaluated the information acquired from her poking around.

I love the Author included recipes.

It is hard not to jump to the end and see what yummy treasure awaits.