The Wedding Rescue A Short Story by Jenna Brandt 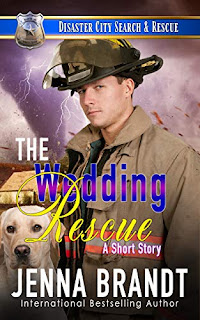 A search and rescue firefighter is a groomsman, one of the bridesmaids is avoiding him, and a storm causes them to get stuck together at the wedding…

Firefighter Derik Cruise used to have a woman to love, but he had to move to pursue his dream of being a K9 handler at an elite search and rescue force. Now, he’s been asked to be a groomsmen at a wedding where she’s going to be a bridesmaid. The moment he sees her, he realizes he still loves her, but all she does is avoid him.

Aspen Sinclair’s heart was broken by a man who picked a badge over her. She’s avoided dating ever since, not wanting to take another risk. She thought she built up enough walls to keep from getting hurt again, but when Derik walks back into her life, she realizes she never got over him.

In this short story, will he be able to tear down the walls around her heart? Can she let go of the past to make room for a new future? And will they survive the storm raging all around them?

Step into the world of Disaster City Search and Rescue, where officers, firefighters, military, and medics, train and work alongside each other with the dogs they love, to do the most dangerous job of all — help lost and injured victims find their way home.

A great super quick read.  This one was a page turner.  It was hard to put it down last night.

Since it was short though reading in two settings made it last longer.

I loved the characters and the Texas locale.

There are alot of Characters.  And a big wedding party. Including the Search and Rescue dogs who were hero's in the end.

There was a bit humor as the Bride was secretly trying to set up  Derik and Aspen not realizing they were Exe's.

It worked out in Derik's favor as it helped him show Aspen he had changed over the years since they had broken up.

After a bit of great on the edge of your seat suspense everything ended Happily Ever After.

That makes a Great Sweet Romance. 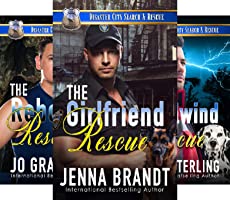 From Book 1: A search and rescue cop training to become a K-9 handler, a lovely dispatcher who always has his back, and an earthquake that threatens to tear them apart…

Officer Ted Hendricks has been biding his time, locating missing skiers and hikers for three years in Colorado, while waiting for a chance to become a K-9 handler. When a spot opens up at the Disaster City Search and Rescue facility in Texas, he jumps at the chance to go, even though it means leaving his girlfriend behind.

Dispatcher Deanna Harper had one strict rule — never date a cop. That all changed when she got to know Ted Hendricks. He was the only single officer in the department who didn’t hit on her, which made him all the more appealing. When he decides to travel across the country to train as a K-9 handler, she decides he’s worth taking a chance on a long distance relationship.

When Ted’s team is deployed to help in the aftermath of an earthquake in Colorado, Ted finds out that Deanna was in the epicenter. Can Ted find Deanna in time to save her? Will Deanna be able to survive until he does? And if they reunite, will they find a way to be together despite the distance between them?

This is Book 1 in the Disaster City Search and Rescue Series.

Step into the world of Disaster City Search and Rescue, where officers, firefighters, military, and medics, train and work alongside each other with the dogs they love, to do the most dangerous job of all — help lost and injured victims find their way home.